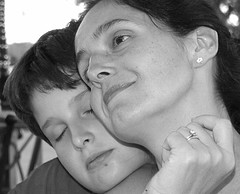 I’ve been pondering deeply my approaches to parenting, and thought I’d share them with you. Let me start by saying that my way is NOT the be-all and end-all of parenting. Like I say in my tagline, I’m just doing my best to get the hang of this job.

Let me also say that parenting is a process that doesn’t end; if you’re doing it right then you’re a lot more mature when the kids move out than you were when they arrived. Looking back, I see how my attitude, opinions, and choices have changed over time. What I’m writing now is different from things I wrote a year ago, and is likely different from what I’ll have to say a year from now. I hope that the changes between me at present and me in the future are slight. In other words, I hope that I’m closer to my ideal than I have been in the past and that I’m there or almost there now. 🙂 Time will tell.

All right. The main foundation for my parenting is Biblical. In other words, I look there first for support for what I do. There are many verses about parents and children that apply oh, soooo often. Here are 2 of my favorites:

Ephesians 6:4 says “And you, fathers, do not provoke your children to wrath, but bring them up in the training and admonition of the Lord.” (NKJV)

Proverbs 22:6 says “Train up a child in the way he should go, and when he is old he will not depart from it.” (NKJV)

You’ll notice that training is mentioned in both verses. This is important, and I’ll devote an entire post just to this concept really soon. After 9 years of having children in my life, I’m just now starting to grasp what training is and how it can help me be a better parent.

The other really huge component is the ‘not provoking your children to wrath’ part.

Now. I’m the first one with a sly grin when the children get aggravated with me for holding them accountable and responsible. What’s important though, is to balance that with just tons and tons of love and respect, not to mention demonstrating daily for them in clear and concrete ways that I’d throw myself in front of a car for them if necessary.

There are three other major influences on my parenting. While I tend to filter them all through the Bible, it’s possible to use them (in at least some form) separately from each other and in a secular setting, if you happen not to have Biblical foundations in your own life. One of them is a mainstream, well-known philosophy. The next is more specifically Christian, probably the strongest influence on me, but is well supplemented by the first. The last influence is, well…..you’re going to think I’m loony when I tell you. 😀

Okay. The first influence I’m going to mention is called Love and Logic. This is a philosophy that is all about teaching children to be responsible for their own actions by implementing natural consequences as much as possible. The parent is in the position of relaxed, loving cheerleader who gets to secretly laugh while the children squirm-uhhhh, I mean deal with the consequences of their choices. Love and Logic parents do not spank their children. For me this approach has been an effort to learn but I’m seeing progress of late. It takes time and careful thought to figure out how to respond to different situations, but when you get into the groove it’s pretty easy to keep going. Until you fall out, refresh your knowledge of the approach, and start all over again.

My second influence (and the one that’s affected me the most over time) is the No Greater Joy ministry. This parenting approach relies heavily on the verse from Proverbs included above, and is where I first learned about the idea of training your children. The original authors are Mike and Rebeccah Pearl, and now their adult children also contribute to the monthly free newsletters. I think it’s fair to say that they’ve gotten wiser and wiser over the years, that they demonstrate the loving part of their methods more clearly now, and that my own increase in understanding has been a big help in that.

I mention them second only because it was reading the Love and Logic materials that helped me understand the No Greater Joy stuff better. I’ll talk about training more in a separate post, but suffice to say it includes the common idea of training (like teaching a pet to follow commands) along with anything you teach your children to do. This can include any skill or activity you dream up. When you’re spending time learning and working with your children, you’re training them. No Greater Joy parents do spank their children, but only in a most controlled way, without anger, and with great deliberation (and some caution thrown in). There’s plenty on the web site and in the materials to teach and explain on this topic.

The third influence is….Cesar Milan, also known as the Dog Whisperer. Yes, this seems a little loony at first glance. Okay, it seems a lot loony. What does dog psychology have to do with parenting? Quite a bit, actually. His show is on the National Geographic Channel, and if you get it I strongly suggest you watch a few episodes. What you’ll see is that Cesar doesn’t train the dog. He trains the owners. He gets the dog under control in like ten minutes actual time (about 30 seconds on the show) and spends the rest of his time teaching the owners how to be the “Pack Leader” to the dog. One of the things that always hits me the hardest when watching Cesar is how he does not yell or even speak the dog’s name. It’s all in his body language and signals when dealing with the dogs.

Now, I don’t know if this applies as much to girls, but with my boys I definitely have to work at being the pack leader or they run right over me. It’s not that they’re bad or naughty. They’re actually very good boys and I get many compliments on their wonderfulness in general.

But children push limits. Constantly. They’re hard-wired to do it. Unfortunately it’s exhausting for the adult on the receiving end, especially if that adult has no tools to use in self-defense. Just as dog owners need to learn how to be the leader in their pack, so do parents need to lead (and train) their children in the way they should go.

By setting myself up as pack leader, I have to discipline the boys much less, because I’ve established early in the situation that I’m the boss and certain behaviors will not be accepted while others are expected. Rather than nag or yell, I can just use some quiet signals with them to get cooperation. It’s working. I’m seeing them respond to a simple look or tip of the head rather than having to even use words. In certain instances at least. 🙂

I’ve tons and tons more to say on all these influences, so I’ll definitely be visiting these ideas in more posts in the future. Please check out the sites I linked here for you, and let me know what you think.