How I Saved Over 400 Dollars on Vacation 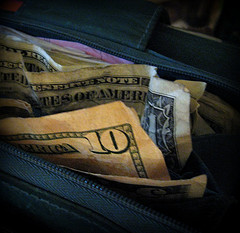 The whole family enjoyed a great trip to America’s Historic Triangle in Virginia last month. In case you are not aware, Jamestown Colony was founded in May of 1607, which makes this year the 400th anniversary. The older boys studied America’s colonies last spring in History, and when we realized that this was a big anniversary year we decided to make the trip out there. Since we’d already had a grand vacation to California this spring, I was more anxious than ever to keep costs down and not stress the bank account. Here are some of the strategies that paid off:

Stay at hotels where breakfast was included. With a family of 6, this is a big savings area. Assuming that a breakfast value meal at a fast food restaurant is about three dollars, we would have paid eighteen dollars for one breakfast. Now. My children rarely eat fast food breakfasts…for some reason they don’t care for them (I’m not complaining). So we actually would have been throwing away about eighteen dollars worth of product, or paying a higher price to eat at a sit-down restaurant. For the sake of argument, we’ll keep it at $18. Figuring 7 days’ worth of breakfasts, that comes to a total savings of $126.

Bring along lunch and snack items. A laundry basket and a small crate were all I needed to hold staple items like peanut butter, bread, chips and crackers, raisins, apples, trail mix, fruit and applesauce cups, cookies, gum, paper plates, plastic cups, paper towel, and plastic utensils. Whenever we made a bathroom stop, it was easy to just clean hands with the handy dandy sanitizer and grab a snack from the back of the van. A small bag of chips starts at a dollar at a gas station. Multiply that out by 6 and by about 4 stops during the driving portion of the day, and you easily can spend $24 on munchies. Per day. Over 7 days, that comes to $168. Instead, Hubby spent about $40 at the store (granted, he gets a discount, so this particular savings is greater than average) and we had snacks aplenty the whole week. We’ll call this a savings of $100 due to the discount.

For bonus points, use a cooler that plugs into the vehicle. I used the cooler to pack juice, milk, cheese, sandwich meats, yogurt, and grapes. We borrowed a cooler like this for the California trip and liked it so well that we bought our own this time. The cooler costs about a hundred dollars, but we more than paid ourselves back for that with all the meal-time savings.

Reserve hotel rooms that feature a microwave and refrigerator. If you do splurge on eating out, or are in a museum or other place where you have to stay on campus for the day, throw the leftovers in your cooler and then put them in the fridge in your room for a great late night snack. We also transferred the cold food items into the fridge whenever possible to go easy on the cooler. Microwaves are handy for the popcorn that I brought along, and for frozen meals that can be purchased at local grocery stores. I had also packed some of those Betty Crocker microwave brownies, purchased on sale for a buck apiece. Each night it was easy to provide the boys with a ‘bednight snack’ without having to hit a vending machine or gas station. I figure we spent $2 per night on snacks, instead of $6. Conservative savings estimate: $28.

For bonus points: shop at big chain stores for food along the way and sign up for their discount card. We didn’t run into this out East as much, but when we headed West the big grocery stores had very high prices for anyone who didn’t have one of their membership cards. In hindsight, I wish I would have just signed up for the silly card. It was actually cheaper one night to eat off the dollar menu at a Jack In The Box restaurant and serve the boys milk and juice from the cooler than to buy a loaf of bread and some sandwich fixings at the grocery store in Arizona. Prices were often double for shoppers who didn’t have the discount card.

Buy frozen meals and cook in the hotel room microwave. Granted, this isn’t the MOST healthy way to eat, lol. But it’s just for the week. Assuming that we feed the family of 6 at a sit-down restaurant for dinner, we’re lucky to get out the door with a $35 tab. In contrast, 6 frozen meals can easily be purchased for about $12. That’s a savings of $23 per meal. Assuming that we did the frozen food thing 4 times, we saved $92.

Check for available discounts at hotels.  Hubby checked at work, and sure enough there are corporate discounts through his employer.  I searched for hotels using various online services, then compared to the discount list.  I was able to save $48 at the hotel in Williamsburg, and another $15 at one of the Pennsylvania stops.  Total savings: $63.

Purchase multi-pass tickets.  Some time spent surfing web sites for the Jamestown and Williamsburg area turned up some package ticket options.  If we had purchased tickets to the areas we toured separately, it would have been about the same price, but we had the option of going back to any one of them over 5 days.  If we’d have had to pay admission again, costs would have gone up considerably.  This is a strategy I plan to use more to my advantage on future trips.  With the current ages of the boys, once at each site was plenty.   (We did benefit from a multi-pass arrangement when we went to LegoLand last spring.  It was only an additional $12 per person to go for an entire second day of amusement.  That’s $72 for the second day, as opposed to hundreds if we’d chosen to go to Sea World, for example.)

So. I just added up the savings for the week, and I come up with at least $409. The cooler cost does cut into that, but considering that we saved a similar amount or more on the 2-week trip last spring, and that the cooler will be used for many more outings big and small in the future, it’s not really an expense as much as an investment.

Do you have any other money saving travel tips?

Earnest Parenting: tips to save money.