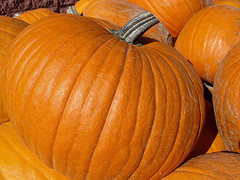 The boys are incredibly fond of pumpkin pie and pumpkin bread, especially if it’s home made. I cooked and froze my own pumpkin a couple of years ago and it worked out really well so I just did it again today.

First, I bought pie pumpkins. These are smaller than your typical Hallowe’en Jack O’Lantern. Since it’s been such a long time, I went ahead and looked up a few recipe sites and they all said I should cut the pumpkin into 2-inch chunks and boil. Psssssshhhht. Like I’m going to spend a lot of time cutting pumpkin into tiny chunks and then fish them out of boiling water. Instead, I washed them, cut the stems out, and then sliced them in half. I laid them cut side down onto a pan lined with tin foil, then covered with another sheet of tin foil. They went into the oven at 400 degrees for an hour. I checked them occasionally and took them out when they seemed soft and gave under pressure.

After letting the pumpkins cool for just a few minutes, I scooped the pulp out and pureed it in the food processor. From there, it was a simple matter of measuring into 2-cup portions and putting it into quart size freezer bags. I chose 2 cups because that’s the amount required in my pie and bread recipes.

So. Now you know how to prepare your own pumpkin. 🙂 Wanna use it? Here’s a pumpkin bread recipe: