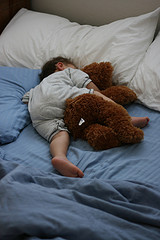 I wrote my weekly post over at ForeverParenting.com about our adventures in sleeping with Captain Earthquake.

Captain Earthquake earned his name with his sleeping habits. He’s never been one to stay in bed all night. When he was in the crib, I was up at least a few times a night every night to cover him up and settle him down. Moving to a big boy bed didn’t make things easier, because then he was free to come down to either get in bed with us or have me walk back to his room for a tuck-in.

At least in the early days of this process I heard him coming. He didn’t like walking on the tile floor in the hallway, so he’d run and I would hear him. More recently he’s been sneaking up on me. There’s not much creepier than knowing you could open your eyes and be startled by a small face staring at you in the dark. It’s not conducive to a peaceful night’s rest.

So. Long introduction to all the different issues we had to solve on the quest for a good night’s sleep. Here’s a rundown:

Well fitting clothing: One of the early mysteries was this bizarre pounding noise I used to hear before he came down to get me up in the night. I asked him what it was, but couldn’t get a clear answer. Hubby finally decided to lay on the floor one night and saw the Captain get out of bed and start pounding his feet really hard. Hubby asked him on the spot what he was doing. Apparently the Captain’s pajama bottoms were riding up his legs and he didn’t like the feeling so naturally he was stomping on the floor to get them to slide back down.

Breathing difficulties: The Captain did a lot of loud breathing and some snoring. We went to the family doc about it and tried several approaches, none of which helped. We got referred on to an ENT and after some trials with that doc we opted for tubes in the ears and a tonsillectomy. That was not easy for me, but he does breathe more quietly and the snoring is virtually gone. The ENT told us that sleep apnea can be related to swollen tonsils.

Room temperature: I had crawled into the Captain’s bed for some bedtime snuggling when I noticed that the air conditioning vent was blowing air right on him. All it took was laying a book over the half of the vent pointed his way.

Bedding that stays put: That child can kick his blankets into an amazing twisted jumble. Our most recent hangup is him kicking the covers off and not being able to get them back on. I’ve used a three pronged approach on this point. One, we had ‘cover yourself up’ lessons where I tried to make the practicing a game. Hubby hung some extra blankets on the foot board of the bed for him to pull up easily. Second, I showed him where the extra supply of blankets was in the living room so he could fetch one himself if necessary. Third (and this is what actually worked for us) I bought some clips (the kind that are on the ends of suspenders) and attached two of them to a nice long piece of elastic. That clips to the quilt and sheets and holds them in place on the bed.

Emptying the bladder before bedtime: quick and easy to send him to use the bathroom right before tuck-in.

The final and most difficult battle was just convincing the Captain to stay in bed. 2 years ago I was faced with the choice of carrying him back to bed or dealing with a massive screaming fit in the night. So I carried him to bed, did the whole tuck-in kissy thing. That worked. Only it didn’t help. Indeed, I appeared to be making things worse: he got up more and more each night. So I gradually weaned him from being carried to walking holding my hand to walking ahead of me. And yes, there were many nights of crying. He even tried sleeping on the floor in our room once.

We got him to the point of waking up only once or twice a night since the tonsillectomy this spring. The doc told me that since his breathing has cleared, chances are the wake-ups are just habit and not apnea. Solving the loose blanket problem has made a big difference too.

It was when the boys spent ten days at Grandma’s house that I really got hit with reality. In ten nights of sleeping in a different bed, and in a home with no air conditioning in the hot hot summer, the Captain stayed in bed all night every night without a problem. When we got home, I looked him in the eye and said “If you can do it at Grandma’s, you can do it here. I know you’re a big boy.” And voila. He started either staying in bed all night, or walking back to put himself to bed if he wakes up. The rule is if he gets up before I’ve gone to bed he can have a hug, kiss, and tuck-in. If it’s after I’ve gone to bed he’s supposed to use the bathroom and put himself back to bed on his own.

After several weeks of relative peace, I’m somewhat confident saying that we may tentatively have a solution to the problem. (Ya know. I figure I can declare actual victory when he’s 18.) It’s so wonderful having him actually sleep a whole night! Tempers have improved and the little guy doesn’t have circles under his eyes anymore.

So, anyone else have a little one who wouldn’t sleep through the night? Is it any better? What did you do to solve the problem?