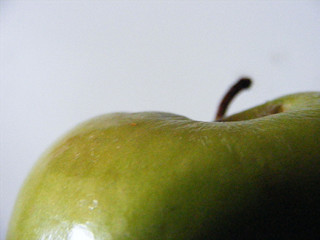 My weekly post is up over at ForeverParenting.  Today, I wrote my recipe for applesauce that the kids and I use each year.

One of our family fall traditions is making applesauce together. The kids have enjoyed some trips to the apple orchard in the past; to be honest though, I’m usually on a massive production mission and I get most of my apples from the fruit stand or even the supermarket.

For the past couple of years I’ve had great success using Empire and Gala varieties. They produce a good texture and color, and have a nice balance of tart/sweet. I like most to mix the two together, but I’ve cooked them separately as well.

We live in a climate that gets pretty chilly this time of year, so I can buy apples any time in October or later and keep them pretty well in a cooler in the garage. A lady at the orchard told me she routinely keeps apples that way well into January.

Annnnnyhow. I usually run the apples through my apple corer/peeler/slicer. Well…the boys do. We have the kind that attaches to the counter via suction cup and the kids crank right through them. I load the apples in, the boys crank the handle and pop them off. Then we repeat that. A lot. They’re very good at it.

This year, the apples were starting to get soft and I knew they’d break in the corer/peeler/slicer so I used the little gadget that cuts them into wedges and separates out the core. I wasn’t comfortable with the boys using that cutter, so I did all that part and put as much as I could into my crockpots. I set the large crock (6 quarts) on high for 4 hours. The smaller crock I set on high for about 2 hours, then turned down to low. I still had apples left over (I did 2 batches of a half-bushel each) so I put them into a Dutch Oven and into my oven at 275F for the 4 hours.

Once the apples were all soft, I loaded them into a food mill, and the boys enjoyed turning the crank to mash the apples through. Periodically we scooped the peel out to keep the mill clean. Some peel did make it through to the final product, but it was so soft from the cooking process that I don’t think it’ll be noticed.

We did a little taste testing, added about a half cup of sugar and a tablespoon of cinnamon and then ladled into jars and canned. I didn’t have the boys deal with any of the hot water parts; they’ll be allowed to do that kind of thing when they’re much much taller.

There was an extra bonus this year: apple cider. I hadn’t cooked the apples with the peel before, and there was a lot of liquid in the pots when we scooped the apples out. Out of curiosity I strained some of it and gave it a taste. Delicious! In fact it’s so tasty that I had to dilute it with some plain apple juice. I’ve never made cider before. The boys were not tremendously impressed, but they don’t usually care for cider. I’m going to have to convert them.

From each half-bushel of apples, I got about 6 quarts of sauce. We’re going to need to do this a few more times if we want to be eating homemade sauce next summer. Good thing there are 4 boys to help operate the food mill and the corer/peeler/slicer!

Earnest Parenting: help for parents in the kitchen.