When Your Parenting Gets Off-Track: Go Back to the Basics 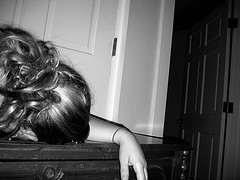 I’ve been corresponding with a friend about difficult children and found myself digging out the Love and Logic book yesterday only to realize that I have really gotten away from some important principals:

So. I’ve pledged to read my book again, and I’m thinking about buying the version on CD for Hubby to listen to in the car. Not trying to pick on him or anything; we just do better when we’re on the same page.

You may be wondering why I think my parenting got off track. I think it really became apparent when I yelled at the top of my lungs at The Mercenary Saturday night, then we both burst into tears and stomped off, leaving Hubby to deal with the carnage.

See, we had a birthday party for the younger boys that evening. The older boys were adamant that they should give gifts to their brothers and wanted me to take them shopping. I hadn’t had time to get the necessary supplies for the event so I combined the two goals into one trip. Big mistake. TechnoBoy didn’t have any money but I didn’t want to discourage the giving impulse, so I consulted with Hubby and we told them that we’d spring for ten dollars worth of gift giving each. The Mercenary does have money (no surprise there), but we wanted to be nice.

The short version is that they spent a lot of the trip begging me to buy stuff for them, second-guessing my purchasing choices, machine-gunning me with questions and suggestions, pouting when I picked out nice things for the younger boys (they’ve conveniently forgotten all the parties they’ve had in life, while the little guys hadn’t had a kid party ever), running ahead in the store and just generally stressing me out. Then because they knew I was getting steamed they were extra nice and kept asking me all sorts of questions and chattering at me, effectively demanding more attention when I just wanted to shut up and shop; that stressed me out more.

Once the party started, after a rushed afternoon of decorating and cleaning (much of which was done by the in-laws, bless them) The Mercenary proceeded to wind up the rest of the kids. And how. I pulled him aside to calm him down and he directly defied me. Anyway. I spent the entire party trying to keep boys calm, which resulted in me telling them over and over in a warning tone to calm down. No, I don’t want to have boys staging giant wrestling matches and videotaping them to show on tv during the party. No, I don’t want the older kids to fall on the candy that came out of the pinata, shoving the little ones aside and frightening the smallest. And so on.

When Hubby started praying that night he thanked God for a fun day and I thought, “I didn’t have fun today. At all.” I decided to just make it through prayer and good night kisses and retreat for the evening. As soon as we finished praying The Mercenary started to ask what was obviously a discussion question. I stopped him and said I don’t want to answer any questions and to ask his dad. He objected and started asking me anyway. I stopped him again with the same direction. He overrode me again and started asking, which is when I started shouting. “DON’T! ASK! ME! ANY! MORE! QUESTIONS!!!!!!!!!” Then I launched into a brief lecture on how I was tired and wanted to be left alone. He said he wouldn’t ask any more questions. I said that would be great and stomped out. We were both crying.

Not a proud moment.

I’ve calmed down and we’re friends again. Okay well I did lose patience with them again yesterday morning but it was totally justified. Right? Right???

Okay. You’re right. No, it wasn’t the best choice. When I got the book out I read a few strategies and took heart. I talked to the older boys and explained that I’m going to be a more positive Mama, and they agreed to work on being more positive boys. So far, we’re making progress. An argument over the computer broke out half an hour ago, and rather than get involved and get all annoyed with them or feel trapped into picking a side I said, “Feel free to come back when you have a plan” and kicked them out of the room.

They showed back up 2 minutes later having apologized and chosen who would take what turn. Woohoo! Victory for all. I’ve been getting a lot more pleases and thank you’s around here too.

Now if we can just keep it up.