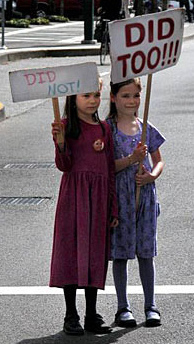 Sibling squabbles…the bane of many parent’s existence. Conflicts include all manner of button-pushing, name-calling, manipulation, one-upmanship, and can degenerate into physical dustups quickly.

So what can we do to solve the problem? Let me start by saying that there’s no one strategy or approach that’s going to be a cure-all. There’s not. Children are still in development, each with his or her own unique set of needs; they learn different skills at different times. Throw in the fact that every child has his own personality and understanding of life, and things really get complex.

That said, there are some things that you can try. I’m not trying to get all hopeless here.

As I said in my last post on this subject, first you need to try and figure out what the root cause of the arguing is. Are your kids hungry for your attention? Are they just trying out their verbal skills by driving each other insane? Is there some other kind of stress or imbalance in the home?

It’s entirely possible that they’re just being naughty. I try to leave that as my last explanation rather than the first.

If the kids are fighting each other to get your attention, then try giving them more attention. Do something with each child that speaks directly to him/her. For example, Captain Earthquake is a huge Mama’s boy plus physical touch really means a lot to him. So lots of hugging and holding from me can net me some smiles quickly.

If it’s a developmental issue where the kids are just trying out ways to use words to drive others crazy….well. That can drive everyone crazy. The Manager and Captain Earthquake have been doing a lot of that lately. I typically stop them and just explain that it’s not nice to say things that way. Then we do the apology/forgiveness routine and I redirect them to something more positive.

If you’re dealing with some other kind of stress or imbalance in the home, I would suggest that you try to reduce the stress or increase the balance. Maybe a fun family afternoon throwing snowballs, or time together playing a game, getting some exercise, or maybe even doing something to help someone else would improve the mood.

Okay, you’ve eliminated all the other reasons and the kiddos are still fighting. And they’re driving you crazy. This is where I start employing the Love and Logic techniques.

Love and Logic relies heavily on natural consequences. If a person understands that the consequences they’re experiencing were caused by choices they made, they’re likely to learn to change those choices. A simplistic example would be if I stayed up too late at night and was too tired the following day, I would learn that going to bed earlier makes my own life easier.

There’s not always a quick natural consequence to arguing, which breeds long-term resentment and revenge cycles. That puts you in the position of manufacturing something that still is logical and that you can deliver calmly. Remember, anger short-circuits learning.

That was the long way around the block to say that these are possible strategies for dealing with constant arguing/sibling rivalry. Congratulations on still being with me. 😀

The biggest point I can make if you’re using one of these strategies is to follow through. Just today, The Mercenary tried to stand up on a chair with The Manager, and (because it was a wooden chair on tile floor) the chair slid away a bit. The Mercenary got very angry and started yelling at The Manager, who’d done absolutely nothing wrong. I told the angry boy that he’d have to come back later to see the computer he’d been trying to look at. He stepped down and tried to convince me that he wasn’t angry anymore (his body language told me that wasn’t the truth) and I said, “No, we’re going to stick with what I already said. You may come back later and see.” His temper flared up again and he stomped off. A few minutes later, he had truly calmed down and was able to join his brothers without threat of argument or violence. I am confident that he’ll work a little harder to control his temper in the future. If I had let him join us while he was still angry, he wouldn’t have learned that unkind behavior loses causes loss of privileges.

There are certainly many more ways to deal with the problem. These are where I’d start. Anyone have other methods they have successfully used to slow down the sibling rivalry? Leave a comment and share with us.

Image by Write From Karen, via Creative Commons License, some rights reserved