Living Up to the Nickname 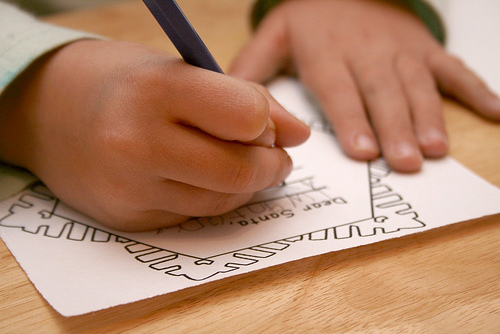 I’m not really strongly invested in the boys learning to write with perfect penmanship.  Between keyboarding and advances in voice recognition software, I figure that actual writing will be a pretty small percentage of their day by the time they’re adults.  Heck, I barely write….most everything I do is typed.  So the only requirement I have is that they learn to write legibly.  Unfortunately, The Mercenary’s writing is very difficult to read.

Back when we started learning to write, I warned him that learning to form the letters incorrectly would make life difficult later on.  That didn’t really help.  I was hoping that when he learned cursive in 3rd grade, he’d be able to do that better and that the printing would naturally improve.  It hasn’t.

I’d decided a while back that I would have him go back and do another course in the printing book once he was older.  I am hoping that he’ll put some effort into building some better habits.  We use  a program which translates into about 3 months of work in a workbook, and then some reinforcement over the rest of the school year.  As far as the boys are concerned they’re already “done” with handwriting this year since we finished the book before Christmas.

Next year I’m planning to have them take one more shot at cursive, so that leaves me needing to get The Mercenary to do the printing book at some point.  I’ve mentioned the need to improve and the plan to do a course through printing again many times to get him used to the idea.

Today I took him aside and explained that he has some choices with the program.  He could work on it this school year once he finishes the typing program.  He’s a long way ahead of TechnoBoy in the lessons, so we could work on printing while his brother is typing, and it wouldn’t have to feel like an extra book.  Alternatively, he could work on printing while I’m doing phonics with the little boys over the summer.  Or, he can choose to do it next fall but it would be something that only he is doing and might feel like an extra assignment at that point.

In fact, he degenerated into a blubbering mess before I finished outlining the options.   Using my best Love and Logic approach, I asked him to think about it and let him know that it was his choice and we could talk about it again later.  Then I beat a hasty retreat.  He kept saying over and over “But I can read it”.  Which is true, 95% of the time he can decipher his own writing.  On the other hand, when I wanted to scan in the story he wrote and post it on the blog, he got pretty nervous and refused.  He told me flat out that he was embarrassed to let people see how he writes.

I left him to finish crying, figuring that he’d do his usual blowout and then calm down.  I was just finished telling Hubby all about it on instant messenger when The Mercenary came out and asked me if I was sure he had to do the printing.  We ran through the conversation again, and then the next thing he asked me totally took me off guard.

I managed not to laugh too hard and told him gently that no, really, paying me wouldn’t help.