When You Get Stuck in a Power Struggle 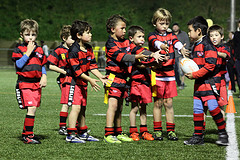 When we got up that morning it was cold and raining. Unfortunately, it was the first day of soccer practice and the first thing the older boys had to say was how awful it would be to have to play in this weather. Thanksalot guys.

The Captain picked up on that immediately and started pouting and saying adamantly that he wasn’t going to play soccer. I tried to explain that the chances were it’d be canceled anyway. After that the whole thing was forgotten.

There was oh, sooooo much complaining and unpleasantness in general that morning (I’d tell you all the details, but the story would be way too long. Suffice to say, boys were not cheery.) that I finally announced that everyone was going to sit at the table. Now. And not talk. At all. So there.

Interestingly, they did really well with it; the older boys were more productive and work got done faster than normal. The younger boys painted, colored, printed, circled letters, sounded out words, counted to twenty, and more. There was pleasant chatter and cooperation. By lunchtime everyone was in a good mood. They were pleased with lunch, finished off the last few things and went off to play the Wii. When the weather cleared, 3 out of 4 went outside to play.

They were also cheerful for dinner, while dressing for practice, and on the way in the car. The Captain even said, “I looooooove soccer!!!”

When we arrived, I had to talk to the other parents (because I had the snack schedule) while Hubby got the boys around to practice. When I turned around, the Captain was standing close to me and wouldn’t walk over to listen to the coach. Hubby and The Manager were already over there, so I grabbed Captain’s hand and walked him over. He wasn’t pleased with that arrangement, especially when I made it clear that he was to stand there while I walked away.

It took him about 10 seconds to start crying and grabbing at me. Hubby didn’t know what the problem was, and neither did I. We’ve had episodes in the past where separation from me caused discontent and the only way we’ve ever resolved the situation was for Hubby to take him and me to leave the area; nothing else calms him down. So I went back to working on snack schedule issues and Hubby tried to get the Captain to calm down and talk. When that failed, we agreed that perhaps sitting in the van would help.

That didn’t work either. Sitting in a nice warm, dry van wasn’t going to encourage him to come back and play with the kids. After giving him a little bit to calm down, Hubby brought him back by the field and gave him the choice of standing there to watch or going out to play.

The Captain stood there. Defiantly. He was so small, all by himself in the rain. His older brothers started to play football nearby and I caught a smile which quickly disappeared when we shooed them away. Hubby and I stood several feet away watching him and cheering on The Manager. Every little bit we looked over at him and tried several times to entice him into playing the game. It was a no go.

Internets, this turned into a power struggle darned fast, and we really hadn’t planned for it. There were times during soccer practice last fall when he balked but with a little pushing from us the Captain joined in and had a blast every time. Monday was a very different experience.

At the end of practice, we told him that he should head to the van. I was the last to get in, and was very surprised to hear the Captain tell the Manager that he was rooting for the other team and that he wanted the Manager’s team to lose. I couldn’t believe what I was hearing.

Hubby told me that there were no tears until the other boys were going to bed later on. Apparently the Captain was convinced that he hadn’t been fed as much as the others. (That wasn’t true and Hubby told him so.)

When I walked in to kiss them goodnight, I found a sad little boy just leaving the bathroom so we talked right there. I hugged and kissed him and we had a little chat in which he really made no sense whatsoever so I still don’t know what triggered the whole event in the first place. I told him I love him and gave him more hugs and kisses and sent him to bed.

Later, Hubby went in and gave him more hugs and kisses. He reported that Captain was sleeping pretty soundly but I am convinced he knew his Daddy was there. Hubby feels bad about the way the evening went; I think the image of that defiant little figure is still burned in his memory.

So. Not a great way to start the soccer season. The idea was to have a fun recreational experience as a family. We’ve got a week to figure out what to do to make things better for the Captain.

The ice cream stand is open now, and Hubby casually mentioned that next week after soccer practice there will be ice cream for boys who play. We’re hoping that will help spur a little motivation. The only other thing I can think of right now is to make sure it’s not cold and raining next Monday (ha), and spend a lot of time filling up his Love Bucket.

Suggestions are welcome, and I’ll update you next week.

Earnest Parenting: help for parents who have grumpy boys.