What Do You Teach Your Kids About Guns? 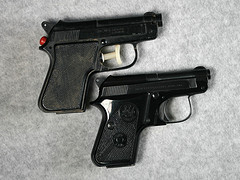 A boy in a nearby town was accidentally shot and killed by his best friend this weekend.

The exact details are unknown right now, but it’s still so sad. The boy who died was 14, and his best friend is 15. According to the news stories, authorities are assuming that they were just playing with the gun and didn’t realize it was loaded. If you happen to have guns in your home, please, please, please, make sure your kids can’t get to them.

I learned something new about the gun laws in my state. Apparently it’s illegal to point a weapon at someone, whether it’s loaded or not. A person found guilty of that offense can be sentenced to a year in prison.

The young man who was holding the weapon is looking at the year in prison for pointing the weapon plus 15 years for manslaughter (if he goes to trial and is convicted). On top of that he can’t avoid serving the life sentence of carrying the memory of his friend’s death and his own part in it. My heart goes out to everyone involved in the tragedy.

When our boys are old enough we want them to learn how to handle guns properly and with respect. The hope is that we can impress upon them the importance of handling a weapon responsibly. If you’d asked me about this ten years ago I would have told you that we wouldn’t allow the children to have guns or gun toys.

Yeah. Right. 4 boys later I just try to play it cool and not make too big a deal about any of it. My current reasoning is that if we tell them not to shoot at people and stay calm they won’t get all weird about it. We don’t have any real guns in the house so them finding one to play with here isn’t an issue. However, that still leaves the rest of the planet.

So that brings me to my questions: What do you teach your kids about guns? Anything? If so, at what age do you allow them to shoot a gun and what kind? Did you teach them yourself or send them to a certified gun safety course?

I’ll get things started by answering in the comments.

Earnest Parenting: help for parents who want to talk to their kids about guns.