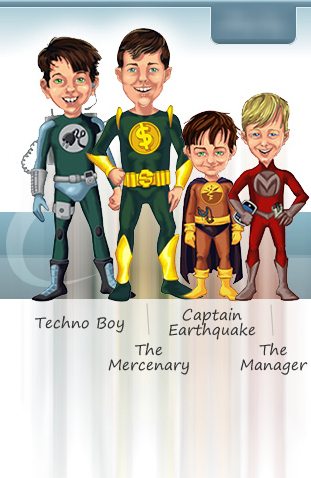 Hey everyone, what do you think? I’m really pleased….LOVE my new site design. I was really blessed to work with people who were just awesome. Great designers and artists helped make all the elements come together; and kept me on track when the indecisiveness was starting to overwhelm. I strongly recommend all of them if you’re in need of any design or graphic work.

Many thanks to Chris for all his hard work on the design. Logo work was done by The Leader Team(they did a terrific job!), and the caricatures up there in the corner were created by the wonderful folks at Caricatures Now.

The boys have gotten just a huge self-confidence boost from this process. If you have a chance to create a superhero persona for your child I highly recommend it. I stumbled into the whole thing by accident, really. I came up with the names more to protect the boys from future embarrassment and to protect their privacy. Naomi knew about the redesign and suggested the characters which led to the search on elance and the great folks at Caricatures Now. (I also found The Leader Team on elance.)

The character design process involved photos being taken and then ideas going back and forth. At one point, the Mercenary was carrying a book titled The Rules. I knew we were on to something big when he informed me that holding a book would interfere with his flying abilities. Since then, there have been many games where each boy’s superhero abilities were invoked. They’re all walking a bit taller these days.