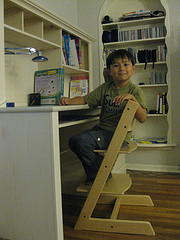 Some children have been calling my boys inferior because we homeschool. The first time The Manager and TechnoBoy mentioned it to me I was pretty shocked. I’ve been prepared for adults to give me a hard time about it, but to have children make these comments was something I hadn’t predicted.

Basically, the kids are telling my boys three things:

Pretty much every homeschooler I know has faced these criticisms at one point or another. I have to admit, I never heard them coming from the mouths of children before now; however it was a good chance for us to talk about the claims as a family and begin to formulate a plan to deal with the situation.

For starters, I pointed out that the young lady telling them they were too old just turned 9 and is in the 3rd grade. My boys just turned 10 in 4th grade. Issue dismissed.

As for friends, we counted up the number of children that the boys spend 2 or more hours interacting with each week. The number quickly rose over 25 excluding kids more than a few years older or younger than them. Just because children sit in the same classroom together paying attention to the same teacher doesn’t mean it can count as social or friendship time. Issue number two off the table.

That brings us to the remaining issue: time spent. As I explained to the boys, there are several factors at work here. First of all, it’s a whole lot easier for me to work quickly teaching two boys than it is for a public school teacher in a class of 20 or more. That’s just simple logistics.

Honzay (1986-87) and Karweit (1984, 1985) found that only about half the typical school day is actually used for instruction, the remainder of the time being taken up by schoolwide and classroom matters of a noninstructional nature. And according to Anderson (1983); Fredrick, Walberg, and Rasher (1979); and Seifert and Beck (1984), students spend only about half their in-class time actually engaged in learning activities, the rest of the time being expended in classroom procedural matters, transitions, disciplinary matters, dead time, or off-task activities.

Now. I’m more than a bit skeptical that a study so old is still completely valid (the report in question was written in 1989). It’s entirely possible that tremendous improvement has been made in the public school schedule in the last 20-odd years. Assuming that schools have reached full efficiency during all instructional time, my schedule of 3-4 hours still comes out as comparable when you subtract things like homeroom, announcements and administrative events, disciplinary matters, recess, lunch, and so on.

The other reason I’m so confident that the time issue isn’t a problem is that I believe so strongly in the curriculum I am implementing. I have a degree in Instructional Design; curriculum is a passion of mine. As 4th graders, my boys are finishing up their fourth year of world history. Basically they’ve gone over all of history (in an age appropriate way) from ancient times to the present. In order. I stand by that as one of the most important factors in a good education. Other subjects that we had this year are math, spelling, handwriting, grammar, reading, science, and Latin. Yes, that’s right: Latin. The boys have learned about a hundred vocabulary words as well as some beginning verb conjugation and noun declensions. It was a very low-stress experience and is a great foundation for English grammar and the Spanish instruction that we’ll start in the future.

Even more beneficial in my opinion is the ability we have to meet the boys’ needs as they occur. Today while doing phonics with the little boys we had several breaks because the lesson was challenging. Injecting humor into the mix (they love to shout the answers to questions or have a tickle war) helped move us along. I could grab some treats from the cupboard to reward their efforts, and it was no problem to split the lesson in half and have them do the second part with Hubby when he got home. Showing off to Dad is a great motivator for a little boy. (And treats help.) Since I set the schedule, we can park on this particular skill area until they’re comfortable before moving along in the book. A public school teacher lacks that flexibility.

I know the mother of the children who are giving my boys a hard time, and my first impulse is to talk to her directly. However. She’s a public school teacher, and I believe the words coming out of their mouths are hers. To be clear: I was a public school teacher for 8 years and loved it. I only quit because I knew I couldn’t do justice to mothering twins and my job at the same time, so I chose. I am fully aware of the attitude many in the public school arena take toward homeschooling and why. I think that confronting her-even really gently-won’t do anyone any good.

So. After some prayer and pondering, I told the boys that I want them to try hard not to send the message that they think they’re superior because they’re homeschooled. I’d bet my bottom dollar that they’ve made that claim more than once. We talked about the fact that schooling ultimately doesn’t make the man. Any child could have the best opportunity in the world and still turn out a failure if they don’t choose to take advantage of it. Public school and homeschool are not inherently better or worse options in and of themselves. It all depends on what you do with it.

As long as the criticism remains at this level, I think I’ll opt to let things ride and see what happens. My boys may potentially be in the same Scout troop as the critical boy next winter. If more children are drawn into the fray then Hubby and I may step in.

It’s harder than I thought to stand by and keep my mouth shut, but for now I believe that’s the right choice.

So what about you? Where do you weigh in on all this?? Have you had to deal with children criticizing your family choices? What did you do about it?

Oh, and while we’re on the subject of GNMParents, I’m writing a series over there on picking and processing fruits and vegetables to help save on food costs this summer. The first post goes up on Thursday, then I’ll be switching to Mondays. I’ll be sure to let you know when the posts are published. 🙂 Sooner than I did this time, I mean.