Four and a Half Fruity Ideas 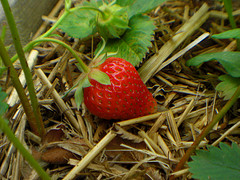 It’s early in the summer season yet, so we’ve only gone strawberry picking so far. I’ve been taking the boys for years, and it’s fascinating to watch them change from year to year. The older boys have gotten pretty good at berry picking. When we went Saturday they were very positive and we picked 6 quarts in less than an hour. When we were leaving, TechnoBoy kept stopping to pick just one last berry. He didn’t understand when I laughed and told him my evil plot to turn him into a berry picker was “coming to fruition”.

Today the younger boys came along. I had to do the obligatory berry picking lesson, which took my attention away from the older guys. The Mercenary didn’t like that very much and kept trying to interrupt me to ask a question. I didn’t like THAT very much and insisted he wait until I finished my thought before I transferred my attention to him. At that point he wandered off to pick berries in a separate area and wasn’t nearly as enthusiastic as he had been.

We’re planning to take friends to the berry patch next week. I’m betting the chance to show off his berry-picking prowess will result in a happier boy.

My weekly post over at GNMParents (now ForeverParenting) is the second in a series on summer produce. This week I covered several different fresh fruit recipes, including

Which reminds me, the boys have eaten up most of the last pie I made. Guess I better make another tomorrow. I’m thinking about making tarts instead of the pie though. What do you think?

Earnest Parenting: help for parents who want their kids to eat fruit.