Do Your Kids Apologize Without a Power Struggle? 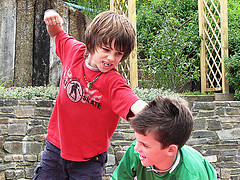 I haven’t talked much about Love and Logic lately and I want to give you an update. After reading the books 3 or so years ago I still see great wisdom in the approach. I’ll be honest: being loving while I’m being logical doesn’t exactly come easy. 🙂 Logic….I’ve got that down pat. I can do logic. Staying calm and taking advantage of my children’s mistakes while keeping my mouth shut and trying to let them learn for themselves is not my natural groove. I’m much more prone to talking at them WAY too much.

That said, we’ve had some successes here and there. Mainly I’ve been learning to take my time when issues arise, and to try (strong emphasis on TRY) to keep my mouth shut and think before speaking. This actually has resulted in my having to stop the older boys from stepping in when their younger brothers are arguing. I’m seeing that if I wait quietly, about half the time they solve their own problems without me. Of course the other half turns into shouting matches or worse, but we’re working our way through that.

Tonight The Manager came crying to me because Captain Earthquake had pinched him. Because I was quiet and listening I soon discovered that The Manager had given the Captain a “snakebite” on the arm, hence the pinching. Both boys were pretty mad, it was late at night and they were tired. I’ve never tried this one before, but rather than insisting the boys apologize to each other I asked them if they wanted to say sorry or if they wanted to just skip to the “I forgive you” part.

The Captain surprised me by apologizing and stomping off. The Manager followed suit with a whimpered “Sorry” and about 3 minutes later everyone was best friends forever again.

I’ve often insisted on boys apologizing to each other which usually results in a power struggle. Instead of forgiveness and reconciliation we wind up with an argument over saying “Sorry” in a low voice through clenched teeth was loud enough at which point one or more boy stalks away angrily. I can see where this new strategy will work again in the future if both boys have offended one another. I’m not so sure what to try when only one boy is on the offense. Any suggestions?

Earnest Parenting: help for parents who want to teach the art of apology.