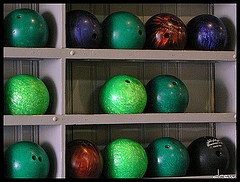 Up next in the Family Builders series: Bowling. This is a sport that gets you up and moving a bit without excessive strain. Cheering each player on while encouraging them to improve their game helps with sportsmanship and strengthens children’s sense of the family being part of a team.

Bowling is an activity that all members of our family enjoy. Being that most of the gang here at Earnest Parenting is male, anything with competition is well-received. As it happens, I play at about the same level as the boys and Hubby is just out of practice enough that we ended up with pretty close scores. Heh. That will change, Internets. I just need to keep practicing.

I’m also pleased to report a new discovery today: my younger boys are well on their way to perfecting what I like to call Interpretive Bowling.

In one attempt Captain Earthquake demonstrated 3 key moves. I saw him perform what I call the Cat Out Of The Cradle, the Seismic Event, and the celebratory Right Kick.

Then there is The Manager. He also performed the Seismic Event, but with a slower more definite tempo and threw in a clap for good measure. Rather than the kick, he performed the Double Spin to great effect at the end of the first throw.

My favorite part of his technique wass the speed at which he moved from the ball return to the alley to throw it, although the hopeful pose I like to call the Snake will be great for blackmail when he graduates from high school. He was disappointed with his results, and finished the performance with a snazzy Pout Walk before giggling his way off-stage.

Anyhow Internets, if you have a chance to take your kids bowling I say go for it. You’ll have fun and some laughs together as you create some memories and strengthen family bonds. Oh, and if you have a video camera, take that along too. You never know when you’ll get some blackmail good footage.

Earnest Parenting: help for parents who want to go bowling.