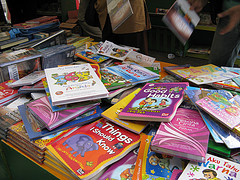 Tomorrow is the last day of the third week of school. Last year at this time, I posted about some battles that I was having with the boys. Some time later, a group of women who disagree with me on some basic parenting philosophies found the post and spent a few days ripping me up one side and down the other.

I’m about to discuss the same topic over the next few days, and if you want to comment with constructive criticism or observations I’m all ears. No one is more critical of my parenting than me, and doing a better job is always an aspiration. I’ll take help and advice and suggestions offered supportively anytime.

However, if you think that I worship an unmerciful God or that I am fatally selfish and mean I would like to respectfully request that you keep that opinion to yourself. Hurting my feelings isn’t going to make me a better person; neither will twisting Bible verses or lecturing me on my cruelty. I’m just sayin’.

Okay, on to the topic du jour.

Sooooo, it’s the third week of school. Because the younger boys have moved into first grade, school was a whole new ballgame this year. Kindergarten only required them to do 3 academic subjects, but in first grade that increases significantly. Trying to balance that against the older boys in 5th grade-who are also moving into different subjects with more independence this year-has been both overwhelming and tricky.

One great thing is the input the boys have given me on running the day. We’re more relaxed than we’ve ever been and the older boys in particular seem to be enjoying life. They’ve had a few stress moments here and there and I anticipate a few snags to come but so far, so good. I may have more to say about them in a few days.

The younger boys have been a different story. By the end of the first week I was feeling fantastically overwhelmed with the demands on my time. It felt like every moment was taken up with school and work to do. I think the younger boys were feeling the same way. At first they liked all the assignments, but by the end of the week I was seeing resistance every time I called them to the table. The question “Aren’t we done YET???” crossed both boys’ lips.

So. We’ve talked about it; I explained how I was feeling and asked if they felt the same way. The Manager didn’t answer, but Captain Earthquake said yes he was. I asked if they’d like to have their tasks listed on the marker board so they could see what was planned and cross things off. That has been moderately successful, but having lots of little tasks (many of our lessons take 5-10 minutes) was still driving them crazy. After more experimenting I think the best plan for them is to have 2 blocks of time for schoolwork daily, both of them immediately after a meal so we’re already together.

It’s a little tricky figuring out exactly what to do in each block. Math lessons usually end with a rousing chorus of the Hokey Pokey (we’re learning left and right). I’d like to be able to do that last so we can dance wildly and then I could release them for break time. However, the phonics lessons require me to work with the boys individually and doing that first proved to be very difficult today. I wound up locked in a standoff with The Manager for hours.

We did sort things out by the end of the day. By then I was exhausted. The boys didn’t seem any worse for wear, and The Manager even sought me out for extra hugs and snuggles all evening. Go figure.

Tomorrow morning will be a test of whether or not my choices today did the trick. I’ll continue the saga after I get the answer to that question.