When You’re Not the Target Demographic 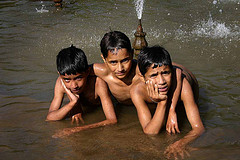 It was immediately clear that I am not in the ad’s target demographic. Very, very clear.

Are you ready for the campaign tagline?

No, I’m not kidding. And yes, there’s a set of photos at the home page, each depicting a pair of unbuttoned jeans with different creatures sticking out of the opening. And of course, you get to see the video on top that shows jeans with something bumping around inside, then the buttons opening and closing back up.

If you’re anything like me, you’ve gotten a boatload of e-mails over the past weeks months years warning of some massive problem or another that requires you to be outraged and begin boycotting immediately. Are you a little sick of those? I am. That’s why I hesitated to even write this post. I’m not asking anyone else to pass on the word, boycott the product, or start any kind of general panic. Really.

There have been quite a few ad campaigns over the years that were dumb or rude or turnoffs, but I’ve never bothered to do anything about them. This time I decided to let the company know (politely) that I really do find the ad offensive and that I’m a lot less likely to buy their product as a result. I know I’m not the target demographic, but still. They’re paying for advertising that is having a negative effect; perhaps they’re interested in knowing that.

I did actually get a polite reply apologizing for any offense and mentioning that I’m not in the target demographic of young males. Yeah, I got that point already.

Here’s the thing though: referring to what my boys call the “Men’s Area” as a beast and encouraging males to unbutton said beast is at best irresponsible. At worst….aren’t they encouraging very bad behavior? Possibly illegal?

While I’m not in the target demographic I’m raising 4 boys who eventually will be, and I find the thought of rewarding that kind of thinking with my dollars appalling. I’m not going to run screaming to mountaintops to demand a boycott, yet I am very turned off by the whole thing and if given a choice will avoid purchasing that brand for a good long time.

So as a parent, what do you think? There’s a lovely comments section right at the end of this post…won’t you share your thoughts?

Earnest Parenting: help for parents who aren’t the target demographic.