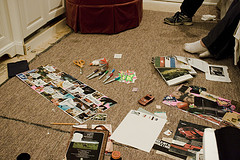 I love my boys. Really! I do. But sheesh there are days they drive me nuts. The big issue of late is picking things up. In my fantasy world, they put toys and books and gum wrappers away as soon as they’re done. That? Major fantasy.

So yesterday I tried out a new technique that I’m calling Parenting via Annoyance. I let them get allllllll settled down in an activity, then I called EVERYONE up to the living room and directed them to clean up particular items. Just as soon as they got back downstairs and settled, I called them all again to the garage to pick up the skateboards and squirt guns I’d already complained about earlier.

Just for fun I had them run through the yard and pick up too. I noticed later that they missed a bunch of stuff, so I’m going to have to irritate them again today. Heh, heh, heh.

How long do you think it’ll take before they get so sick of being interrupted that they just take care of their own things before I bug them?

I’m guessing I’ll get to play this game for a loooooong time.

Earnest Parenting: help for parents who love to be annoying.