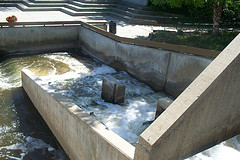 The boys and I went on our monthly field trip recently. We met my folks at a museum to look around a bit, then took a walk to the city fish ladder. I remember seeing it as a child and have wanted to take the boys there for years but I didn’t know exactly where it was.

Fortunately my parents knew just where to go. The walk was right along the river’s edge, which was a bit nerve-wracking for me…imagine a pair of energetic 6 year old boys wanting to “see the water” as they stood a foot from the edge of a rather full and very fast river. We made it safely, thank Heaven.

If you have a fish ladder anywhere nearby, I do recommend going to see it. What an amazing thing! There were actually salmon swimming around in the water and we saw a couple of them try to jump up a level. I can’t believe the jumps they’ll have to make further up the ladder. One of them looked to be 3 feet against a really strong current.

When we got home I looked it up and it turns out that most of the fish ladder activity takes place in the fall, so we’ll be going back for a visit then. I’m so excited about the pictures we may be able to get! Here’s a shot of some of the fish we saw at the ladder. Some of them were downright huge. I wonder if they’ll be bigger in the fall.

I took several other pictures that day, and they’re loaded up in my Flickr stream in the Fish Ladder set, in case you’re interested.

Anyone else have a fish ladder they’ve visited?

Earnest Parenting: advice for getting the best out of education.