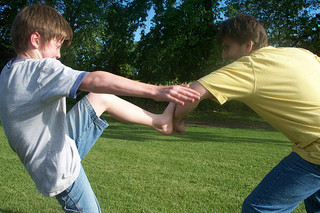 Ahem. Not Karate, exactly. Actually the boys (and Hubby) have begun taking Tae Kwon Do classes. But “Tae Kwon Do Chop” just didn’t sound right for a post title so there you have it.

Hubby has been practicing with the boys and I took a bunch of photos and then I wrote about their male bonding over at GNMParents (now ForeverParenting). And, since there were many more pictures than could be included I went ahead and posted them on my Flickr stream.

Hey, I should probably explain what a Flickr stream is shouldn’t I? Flickr is a photo sharing site where you have an account (you can do the basic one for free) and post photos that you’ve taken. You add titles, descriptions, and tags and you can set the copyright levels and then. And then! You can add all sorts of effects and so on. They even have an area where you can order prints and so on. It’s a nice site.

So I set up an account and uploaded some photos (that’s what they call a stream). Photos are arranged into sets (categories). I have a few sets up there already and will add more over time. Eh, what can I say? It’s kind of neat to be able to share photos with ya’ll. Unfortunately I can’t have you over for coffee and bore you with hours of slide shows. This is the next best thing. Heh, heh, heh.

How about you? Do you have photos up on Flickr? Or another photo sharing site? Do you or your kiddos train in a sport together?

Earnest Parenting: help for parents who want their children to excel.