I Think I Killed the Chickens 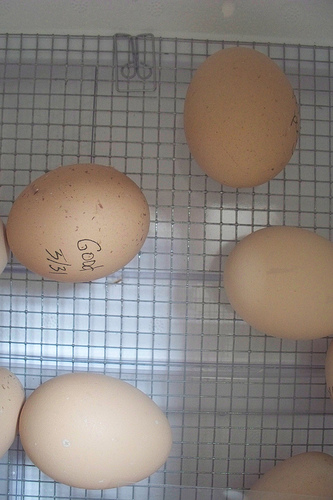 Sigh. This year in science we studied the human body, plants, and animals. SOMEone thought it would be a fantastic idea to hatch chickens as a school project. I haven’t mentioned it yet because, well, I wasn’t sure how it was going to turn out. At this point, I’m a bit pessimistic.

We ordered 30 eggs from the hatchery and they sent us 36 (which was exciting and fun). They arrived via FedEx packed in a box of wood shavings. Our directions were to get them out and warm them to 70 or 80 degrees before putting into the incubator.

We very carefully waited the allotted time, then moved them into the incubator. From there, the trick was to keep the incubator at 100 degrees. This? Not so easy. I found myself checking on them several times a day and the temperature the first week was often at 101 and even 102. Yikes.

Eventually things stabilized, and we arrived at day 9. That was when we learned how to candle the eggs. It’s really neat! Candling rigs are available to purchase, but we found success with a plain cardboard box and powerful flashlight. Cut a hole the size of a quarter (or a bit smaller) in the box and put the flashlight so it shines through. Set up the box in a completely dark room, then hold the egg up to the light coming through the hole (briefly). If an embryo is inside you can see it floating in the sac, and a well-developed network of arteries will have developed inside the shell.

Out of the 36 eggs, we counted 11 that may not be good. They were marked accordingly and put carefully back into the incubator. I read online that bad eggs can begin to “weep” and then explode, introducing bacteria into the incubator which is harmful to newly hatched chicks.

I watched the eggs even closer.

After about 5 days, we candled the eggs again. 2 bad eggs were upgraded to goods, and 4 goods were downgraded to bad. We’re extremely sure that thirteen eggs did not contain developing chicks so those were removed from the incubator. The temperature held fairly well at that point, and we’ve all been checking the thermometer regularly.

We’re now 3 days from the hatch; there was one final step to get ready for the big event.

Captain Earthquake and The Manager helped me do that at about 7:30 last night. Working as a team, we pulled the eggs out, removed the turner, added water to the tray, and replaced the eggs.

In the process the thermometer dropped to 80 but I wasn’t concerned because I had set it on the table and I believed it would bounce back to 100 pretty quickly. I checked it sometime later and it read about 94. In the whole bedtime process I forgot to check the eggs and it was about 1:00 in the morning when I took a look at the temp. 96 degrees!

What followed was a rather anxious night of checking and increasing the temperature, desperately hoping that it wouldn’t shoot up above 100 when I wasn’t looking. By 4:00 am, it had moved back up to 100, and we were still holding there this morning. So….we’ll see. I’m not sure they’ve survived the whole night in the cold thing, and I’m not sure I should open the incubator to pull some out and candle them because I don’t want to introduce any cold air into the system.

All we can do is wait.

If you happen to be the praying type and don’t mind praying for 23 chicken eggs, I’d appreciate it.

Earnest Parenting: help for parents who want their children to excel.