You May Now Call Me a Mother Hen 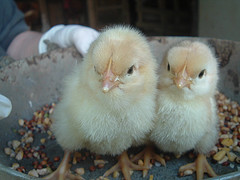 Apparently our little chickies are operating on a different calendar than me. Based on when we put the eggs into the incubator, they should have hatched last Thursday. Allowing for 2 days beyond that, Saturday was the last day that we could consider them viable and expect any babies.

I had completely given up and was even checking to see if we could buy more eggs when a chip popped off of one of them. A very very tiny chip. We watched and waited all day. The crack got bigger and by night we could see someone pushing and hear him peeping, but he was still in the egg. Definition of helpless: staring at a chicken egg knowing that you can’t touch it or help in any way even when you want to do so.

When we got home from church yesterday, he was out! Note to readers: I’ll probably call them all “him” because that’s more comfortable than “it” or switching back and forth to “her”. We won’t know their sex for a long time, so I’m going for convenience.

Anyhow. He was cheeping and peeping and knocking the other eggs around. 2 more had pipped during the night, and one had made great progress. We knew that one more push would do it, so the younger boys sat right there and watched. All of a sudden another egg started rocking wildly, cracked, and out popped a chick. Within 5 minutes the other two were out and we had 4 babies. It was very exciting!

While they were drying out, another egg pipped and started making noise. Progress was slow again but he hatched about an hour ago and is resting. Sort of. I’ll tell you about newborn chicks and resting later…they can be hilarious! So now he’s resting and making noise and egg number 6 has pipped.

The first four have been moved out to the crib. 3 of them look moderately strong, while number 4 doesn’t look so good, so we’ll see. I just picked him up to show him how to drink water and he struggled mightily so hopefully that means he’s strong. Number 5 is drying and we’ll see if more hatch today and tomorrow. Which would be soooo great! If you prayed for our chicks, thank you so much and keep it up. The boys are away for a while and I’d love to have them come home to a nice healthy flock of chicks. I know they’re bummed to miss the hatching.

I’ll try to get some pictures taken and posted today. Right now, it’s time for a nap!

By the way, we have a winner on the What on Earth Contest! The post is updated to show the winner. And the reason for my crazy photos.