The Importance of Respecting Boundaries 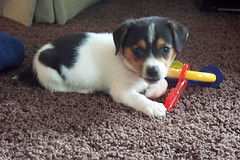 An open letter to a family I’ve never met:

A little over 2 years ago, our family cat Callie died at the age of 17. Because of my allergies, Hubby insisted that we take some time and go without pets for a while and see how it went. My health improved considerably.

The boys have been begging for another pet ever since Callie passed on. Once we saw how much better I was, and considered also how many friends and relatives are also allergic to cats, the idea of getting a dog started to grow. I was pretty opposed at first. Dogs are so much work! I’ve never really owned a dog….I don’t know how to own a dog.

Gradually though, both Hubby and I warmed to the idea. After a lot of searching, prayer, and consideration we chose a breeder this past April. When the late spring puppies were born, we chose just the right one. Let me tell you, she was the cutest one there.

Right around the first of July we requested her and sent in our deposit. I’ll confess that I looked at her picture daily, trying to pick the perfect name. We checked books out of the library and made plans both for the big day when we picked her up and life thereafter.

Then last week, I received a disturbing e-mail from the breeder requesting that I call right away. After 11pm on a Saturday night, I made the call.

Family, it turns out you had visited that same breeder that day. As soon as your car stopped after pulling in, one of your daughters leaped out and ran over to the pen where several puppies were playing. Our little pup was in the group, out enjoying the sunshine of a beautiful day. This was an area off-limits to visitors, but the breeder’s cries to stop didn’t deter your daughter. She jumped over the fence and caused a terrible accident.

I haven’t been given specific details, but in the breeder’s words “our little girl doesn’t look good. Even if she survives, she’ll never be right.” For all intents and purposes, that puppy is no longer ours.

Her name was Gracie, by the way.

The breeder didn’t tell me how long you stayed after the accident, and I don’t know if you understand the extent of the damage that was caused. Apparently one of your daughters wanted to hold another puppy, and you offered to help her do so. That was when the breeder said you would touch no more dogs and escorted you off the property.

I have to be honest here. I don’t understand why you weren’t worried about the injured dog or apologetic to the breeder. The breeder told me she’d yelled and that you appeared to be offended by that. Did you not realize what was happening? That my puppy was so badly injured, and that your girl’s actions caused it? It’s very difficult to comprehend what was going through your minds.

Family, I want you to know that I am not even slightly angry with you. Hubby, the boys, and I all offer you our forgiveness. We were heartbroken over the loss, and I personally am still adjusting to the idea that we’ll never have little Gracie in our home. Even though we never met her, she was loved from afar all those weeks we thought she was ours.

We have been offered another puppy. Picking out a new name is difficult – this puppy is not Gracie. We’ll figure it out though.

If I could ask anything of you, Family, it would be to teach your children to respect boundaries. A fence is a boundary. If your daughter had stopped at the fence, we would have been following through on our original plans and picking up our Gracie next week. Instead, we wait for a younger puppy to be ready.

The reason I took the time to write this letter is that I’d like to see some good come out of it somehow. Perhaps you already know the importance of teaching children to control themselves, and what happened last week was just a freak accident. Maybe someone else reading this letter will realize that even though it’s more difficult to hold children to limits, we as parents have the responsibility of setting them. This situation lays bare-in painful detail-what the consequences can be otherwise.

I want to say again: we are not angry. You are forgiven. If by some twist of fate you happen to read this letter and want to contact me, please feel free to do so.

Earnest Parenting: help for parents who lost a puppy.