Drawing Lines in the Sand 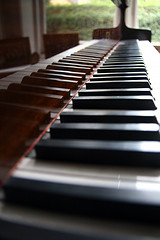 So. We’re deep into the month of August and I say something innocent to the older boys like, “you need to practice the piano today.” They do not take this well, and frowns and foot-stomping abound.

Every now and then in the parenting journey you come to an important battle point. In my mind, this is one of them. If I back down and let the boys quit before they’ve met the goals we set, then they’re going to quit even faster the next time a sport or activity loses its novelty and becomes actual work.

At first, I said that the boys needed to take 2 years of piano lessons. When it became clear that they were going to just do the bare minimum and try to serve their time, the goal did change to “when you’ve learned enough to have a decent foundation: probably 2 years or the first 2 levels of the program”. I want them to learn enough that if they decide on their own to play again, they won’t have forgotten everything. Or, if one of them wants to play another instrument, their time in piano will serve them well.

This is not a concept they understand, and TechnoBoy growled at me the other day that he’ll never ever play an instrument or be in a band. Ever.

I countered by reminding him that I always said I’d never ever own chickens and now we have 33….and I actually like them. He was not amused.

I keep telling them they can spend minutes or they can spend weeks. If they’d just practice for 15 minutes three times a week they’d fly through the songs. But if they don’t do their best, the song is assigned for another week which makes this whole process longer.

That’s what I keep telling them.

Earnest Parenting: help for parents who think their children should learn piano.