Your Complaints Do Not Move Me, Young Grasshopper 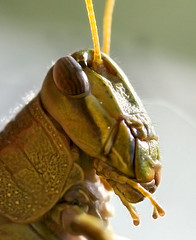 Still working on the school frustration thing. I talked with Hubby about it and he mentioned that the fact that the older boys don’t have desks to work at bugs him a little. They love to lay on the floor to do their work. I do too, so it’s hard for me to insist on a table and chair.

However. Clearly more structure is required, and part and parcel with the no desk thing is the fact that each boy will take over a room in the house (one in the office, one in a bedroom) and get easily distracted. If they go to the same room there are arguments over who’s breathing too loud. (sigh) Therefore, creating a desk-like situation is now a high priority. I announced calmly on Wednesday that everyone had to do their work in the schoolroom area. TechnoBoy used the computer desk that I helpfully cleared, and The Mercenary sat on the couch and used the coffee table.

I congratulated him on his logic, then pointed out that the way we’ve been operating is a failure and as such he had a flaw in his argument. Hee hee hee. I also pointed out that kids in public school had classes of 20 kids or more and they handle it.

TechnoBoy took a different approach, questioning how long it’s been since I’ve actually been in a public school classroom and insinuating that I am decrepit and out of touch. Also impressive, but not terribly effective. While it has been eleven years since I was employed by a public school system, that doesn’t change the fact that things today operate quite similarly to when I was teaching or even when I attended school growing up. Even if that was in the dinosaur era.

My most effective reply was something along the lines of, “I don’t care….this is what we’re going to do”. Which I hate to say to a child, but when they completely disregard all other reasoning, the Because I Said So still trumps all.

They actually completed their work in a timely fashion and we were less stressed. Thursday was an anomaly day so I couldn’t test the plan again but I will today.

Earnest Parenting: help for parents of children who complain.