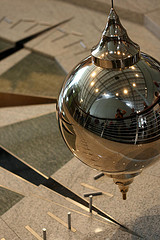 Ever feel like you live your life swinging from one extreme to another? It’s maddening, isn’t it? I don’t like extremes much. Absolutes are fine, but extremes I avoid.

Schooling the older boys in particular has not been easy over the years. The good news is that it’s gotten better each year, but it feels like that improvement has come at a glacially slow pace. More often than not, we’d have tantrums and tears on a daily basis. Gradually that has slowed to the point where (dare I say it?) they appear to be willing to cooperate with the grand education plan.

If we weren’t having an awful day, then we would instead have a terrific one. For the most part terrific was an unusual occurrence; in other words, we swung between extremes. Yuck.

I was pleasantly surprised to realize this evening that overall, today was a pretty decent day. I’m feeling healthier and the boys all decided to cooperate and get their work done. Even when it was discovered that The Mercenary had overlooked doing his grammar, he simply got out the book and did his assignment. No fuss, no muss.

Captain Earthquake usually manages to start every day by getting angry at a brother, and today was no different in that regard. However, when his older brothers accused him of acting like a two-year-old and I surprised him by agreeing, he actually stepped up and found a way to get along with everyone. This resulted in a lot of wild giggling and singing “blump blump blump blump bluuuuump” to the tune of Jingle Bells in the car on the way to piano lessons, but hey…laughter is better than anger any day.

It’s been a long road, and we’re certainly not at the end of it. But having days like this, where schoolwork is finished and I have time to cook, bake, and tackle some large piles of paper that had (ahem) cropped up mysteriously? That’s nice. It feels good to finish with smiles on faces.

It’ll feel even better if we can do it two days in a row.

Earnest Parenting: help for parents who want to be balanced.