Are Your Kids Calm in a Crisis? 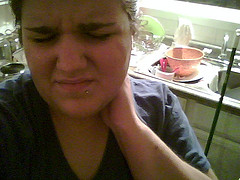 As I sank to the floor I clapped my hands to the top of my head, gritting my teeth in pain. I’d just banged my head on the bottom of a cabinet while trying to stand up. The pain was intense, and I was angry at myself as well. This was the third time I’d hit that very same cabinet…you’d think I could remember it was there.

I saw the blood when I pulled my hands away from my head. The Manager and Captain Earthquake were with me; we were alone at the church getting some work done when I hit my head. I asked them to run and get me some paper towel. The Manager started walking.

He came back with one sheet, but that was quickly soaked.

“I need more paper towel,” I told them. He disappeared again. The blood started dripping off of my hair and onto my sleeve, then my jeans, then the floor.

“Hurry!” I called. The Captain took off running to see what he could do.

They returned shortly with more paper towel and I covered the cut while both boys stood there looking unsure of themselves. After a minute, I told them I was going to go to the bathroom to see if I could clean up. By the time I got there the bleeding had stopped. I washed my hands and cleaned up what little I could and went back to the front.

The boys were hiding in a corner behind a couch looking a little frightened. Poor little guys! I assured them that I was okay and that they could come out.

Our original plan was to stop at the bank and then go shopping. Instead, we just went to the bank and headed home (after a phone call to Hubby so he could get groceries). I asked the boys not to say anything to our friends at the bank that might cause any worry. I know it was hard, but they did an admirable job and didn’t breathe a word. The cut on my head was actually small, and with the bleeding stopped I just looked like I had a little paint on my head-according to the Captain.

Shortly after we got home, TechnoBoy came upstairs.

“Did the little boys tell you what happened?”

After a shower and some serious stain-remover everything was cleaned up. I’m really pleased with the fact that the boys didn’t cry and were able to follow directions in the heat of the moment there.

I can’t take credit for most of their performance; however Hubby and I do stress the importance of being calm when things go wrong. If there’s a spilled glass, for example, the boys are expected to move quickly to get the towel. Standing around staring at the mess isn’t going to solve the problem. Neither is crying or yelling or blaming someone else. Just move. Go get the tools you need to clean up.

A lot of it is just personality, but I do believe that kids can learn to be calm in a crisis. That’s exactly why schools have fire drills, isn’t it? By practicing solutions when things are calm, kids know what to do when there’s trouble. Whenever possible, I try to talk the boys through handling problems by thinking clearly and making calm decisions.

How about you? Got any exciting stories about your kids being calm in the middle of a storm?