The Tooth Fairy Almost Made Me Cry 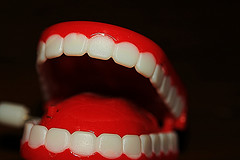 Hubby took the boys and me to a movie this evening, specifically Tooth Fairy starring Dwayne Johnson. Wow. We really enjoyed the story! I knew from the previews to expect humor; I was surprised by the message the movie sent.

In the movie, washed-up hockey player Derek Thompson (Dwayne Johnson) has lost his ability to believe in himself and manages to kill kids’ dreams whenever he talks to them. Thompson plays pro hockey, but hasn’t actually taken a shot at a goal in 9 years. He’s summoned to work as a tooth fairy for 2 weeks and in the process, learns a thing or two about the art of asking “What If?”

Thompson develops a relationship with his girlfriend’s son (he looked about 12 years old), who happens to play a mean electric guitar. The scene that nearly drove me to tears was the talent show. I won’t tell you what happens because it’s too much of a plot spoiler. But I spent half the scene arguing with myself over whether I was going to cry in front of the boys at a Disney movie.

Avoidance of teasing won out.

This movie isn’t exactly Johnson’s best acting but it’s good enough. I suspect that the director and script have something to do with that. Overall I really enjoyed the movie and recommend it especially to families with children between 5 and 12 years old. If nothing else, seeing The Rock wearing a tutu is pretty funny.