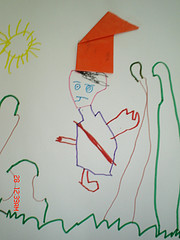 Okay. As of today, the boys and I are still at home doing school. We don’t have everything solved, but I think we made a good decision or two last week. There are multiple issues: scheduling, responsibility, and the whole unwillingness to leave the house or try new things thing.

I’ve talked to the boys for a long time about taking art lessons. All of them have at one point or another enjoyed drawing, so I bought a book to use for teaching drawing. I thought it’d be neat to learn along with them. That failed miserably a year or two ago…we did learn to draw a few pictures but there just wasn’t enough for a novice like me to go on. We tried a few books from the library, but nothing looked like a good fit.

Last year I ran across an online art program and mentioned it to the boys. They refused. I’ve brought it up several other times but got the same response. “No.”

Wednesday morning I plunked the older boys down in front of the computer and clicked Play on the art program. They were instantly hooked. Captain Earthquake got in on the act a bit later in the morning and produced a mighty fine drawing of his own. If I can get permission, I’ll post some of their work tomorrow.

The Manager was not as impressed with the whole thing. He saw the other boys drawing and their enthusiasm, but didn’t try any drawing. I asked him to take a look at the screen. He pouted.

I asked him outright why he wasn’t trying, and the pouting turned into whimpers. He refused to answer the question. I asked him to just watch one of the lessons, which would take less than 5 minutes. No drawing required; just watch the teacher do it. He slumped to the floor and whined some more.

I know that perfectionism is what is holding him back. We went through this with The Mercenary as well. Still do, some days. (Although he’s better for the most part.) But it’s battles like this….dozens of them a day….that wear a mom down. You know?

Eventually I insisted that he sit and just watch the presentation. Once he was done, there were smiles and everything was fine as if he hadn’t gotten upset at all. It’s easy to get annoyed by that.

I told him on Friday that we’re going to try a lesson this week, and that I want him to try drawing a picture. There was less resistance. Tomorrow I’m going to see if he’ll just sit down and choose a picture and watch the lesson with me. Then we can see about actually doing some drawing in a day or two.

Having to fight for small victories is part of why I thought about quitting last week. As Bruce pointed out in the comments, no matter what we choose there will be difficulty. We’re still talking about what the best overall option will be.