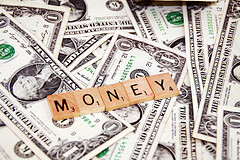 I think I found a solution to the “one wrong deserves another” problem today.

The Manager was the first boy up this morning, taking out the dog. He quickly delivered her to snuggle with the older boys and headed back to bed, which is where I found him when I got up. We’re trying to keep to a schedule these days, so I started rousting boys right after 8:00.

There were moans and groans of, “I don’t wanna get up” as I cheerfully opened shades and rattled around the room. My next stop was the older boys’ room. The dog was actually the easiest to wake, and even she stretched and crept back under the blankets, hoping I’d leave. As I was talking to TechnoBoy and rubbing his back, Captain Earthquake walked in smiling at the puppy. It was clear he had entered to greet her for the day.

TechnoBoy had no more than raised his head from his pillow when he noticed the younger boy in the room and immediately squawked, “GET OUT!!” I tried to stop him and entreated him to be kind, but he replied that the younger boys don’t let him in their room, so he’s not letting them in his.

This happens a lot: the claim that one person can do something wrong because someone else has. There have not been words to express the depth of my hatred for this claim. (side note: I’m especially unfond of the whole thing because Captain Earthquake got hurt and upset and spent several hours being quite unreasonable. This is a separate problem, and one we’re working on; going from cheery to Oscar the Grouch in 3 seconds flat is not a pleasure. If TechnoBoy had been kind, it’s possible we’d have had a happy morning. Possibly….)

It’s not very Love and Logic-y of me, but I have spent countless minutes talking to the boys about the importance of kindness and how Hubby and I are not going to accept that answer as reasonable.

Success rate on that one? Yeah, not so much.

I’ve been working very super duper hard this week at being balanced and pleasant. I’ve had about a 95% success rate so far. Which is downright miraculous. I usually get irritated with them over something or another every day. So how to be pleasant when they’re doing something I actually despise?

Around about breakfast time (after two or three other arguments between boys who were a bit CRANKY), inspiration struck. I told the boys that if they want to use the “he did it, so I can” excuse, they were more than welcome. But that will cost $5. Immediately. And if they don’t have the money on hand, they will drop everything they’re doing and do five dollars worth of chores. And if I can’t come up with five dollars worth of chores for them to do, well, then heaven help them.

I’m going to call this a Put Your Money Where Your Mouth Is strategy.