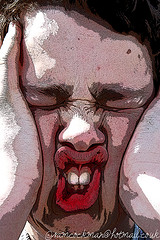 I’ve mentioned before that Captain Earthquake has difficulty controlling his temper. If he gets angry, he routinely lets himself get swept away in the emotion. Lately, if he gets angry in the morning, we can expect him to stay that way for hours.

Now, I happen to be an expert in angry. In my heyday, I could go for days giving someone the silent treatment, and boy howdy did I know how to carry a grudge. But that’s not the best way to live my life; carrying anger only hurts me and it’s not the life of love and forgiveness I’m commanded to live. I’d like to help the Captain come to that understanding a whole lot earlier than I did.

So, we’ve been working on it. There have been almost-daily conversations about anger and the need to control temper. We’ve tried time-outs, consequences, and so on. Happily, there’s been some improvement. One thing that helped a while back was to explain that his room is a safe place to calm down. When I send him there, it’s not a punishment but rather a nice quiet place to relax and get over the anger.

That approach has been moderately successful, but lately the temper…issues…have looked a whole lot like temper tantrums. For a boy who’s well past 7, this is not okay. Sooooo, more talking.

One thing that seemed to help was a conversation we had about how hard it is to stop being angry once you start. To his credit, the Captain has been trying to get over the anger sooner, and he’s been trying to cooperate with me lately. I’ve been in a place of (more than I was 2 months ago) patience and peace, which seems to help him a lot. Laughter has been a great tool as well.

Yesterday I got home from physical therapy to find him in a complete. and total. rage. He’d been outside spraying water-springtime usually finds him looking for any and all water play-and was drilling holes in the gravel driveway with the water. Both Hubby and I had told him not to destroy the driveway, and both TechnoBoy and The Manager knew that. They’d been trying to stop the destruction by turning off the water and disconnecting the hose.

Rather than hear what they were saying, the Captain saw only that his very mean brothers were trying to thwart him. Hence the complete and total rage when I arrived on scene. TechnoBoy wanted to tell me his side of the story, but I had a fairly good idea that the person needing the most correction was the Captain so I sent him away.

At first, all I got was “They’re being idiots!!!” When I sweetly explained that “idiot” isn’t a clear and concrete description, and that we don’t just call names like that, he tried again. “They’re being MEAN!!!”.

Again, that’s not concrete, I explained. Tell me what they did.

It took a while, but he was able to give me a rundown, ending with, “AND THEN I SPRAYED HIM WITH WATER IN THE FACE!!!!!”

I didn’t laugh, but asked him to go to his room for a minute. Then TechnoBoy returned and confirmed the story, filling in a few details. I called the Captain back.

When he stomped back into the room, I explained that I had some things to talk about, but I wanted him to go ahead and finish calming down first. Would he like to do that in his room or would he like to go outside?

“I’LL GO TO MY ROOM!!!!” He shouted. I asked if his brother was already in there.

“Okay,” I said. “But that sounds like a long time to be angry. I wouldn’t feel good if I was angry that long.”

After a moment of thinking, he amended the shout to “I’M GOING TO BE MAD ALL DAY!!!!!’

About ten minutes later, a much calmer child showed up to get a hug and talk things out.

Earnest Parenting: help for parents of angry boys who are trying soooo hard to do the right thing.