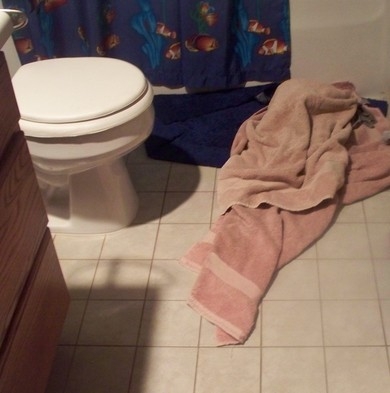 I’m not a neat freak or a germaphobe. Really. I’m not. But I am someone who finds clutter stressful and order….relaxing. Also? I don’t like the idea of getting sick and throwing up. Especially hate the throwing up part and would rather not thankyouverymuch.

Do the boys have these particular issues in life? It’s hard to say. I’m pretty sure they don’t, because they are constantly leaving belongings EVERYWHERE. And their bathroom? [shudder] Terrifying.

One of the biggest bathroom issues we’ve had is the towels. They’re routinely left on the floor.

So. Being that I’m a problem-solving kind of girl, I examined the bathroom to see what was causing towels to “accidentally” be on the floor ALL THE TIME.

Exhibit A: towels on floor (shown above)

(Want to join me here?? EWWWWWWWW!)

Exhibit B: typical towel bar in the Earnest Parenting home.

Note that said bars are roughly 4 feet above the floor, making towel-hanging difficult for short (read: under age 5) people.

Note to note: it’s been two years since anyone in this house met that definition. Exhibit C: another shot of the typical towel bar around here.

Note that bars of this nature are easy to accidentally tear off the wall since the hardware used in installation is flimsy, resulting in Mom constantly saying, “Don’t pull the towel bar down!!!”

Also note: not enough towels are on the bar. Again. All of this begs the question: What on earth will keep the towels off the floor???

I spent years on this problem, Internets.

Finally, inspiration struck. And no, don’t tell me that I could have noticed this in the hundreds of pictures of cute bathrooms you find in all those home and garden magazines at the grocery store.

I refuse to listen.

I’m choosing to live instead with the fantasy that this idea was all mine, mine, MINE!!!

The solution? Hooks! If each boy had a hook, he could easily hang his towel without worrying about ripping anything off the wall. And! I could have hooks lower down for younger people, and higher up for older people. Feeling very pleased with this solution, I conned my in-laws into hanging the hooks for me and sat back, waiting to enjoy boys out of the shower, clean and dried with towels that were not bacteria-laden.

What did I find instead?