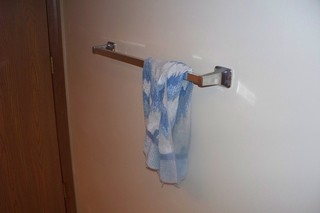 So. A few weeks ago I shared with you the story of the Bathroom Towels that Are Driving Me Batty. Recall? Well, Internets, I have an update.

To recap. When our sad story began, the bathroom floor routinely looked like this: Mind you, this is a bathroom used primarily by boys. Who (ahem) don’t always worry too much about, ummm, accuracy.

Shall we say it together? Ewwwwwwwwwww!

After months of pondering, I realized that part of the problem was the towel bars that were too high and difficult to use. So! Towel bars were removed, and hooks installed. I was SURE this would make life better. Angelic choirs would sing.

Or not. Instead, my results were as follows. Plus, whenever I complained about towels on the floor, boys would all point fingers and accuse one another of the crime. And keeping the towels on the hooks was a bit of a trick, especially for the younger boys.

My beloved mother-in-law was visiting and had a brilliant idea: buy each boy his own towel in a unique color so I would know whose name should be called for towel replacement duty.

Off to the store I went. Each boy was pleased to choose a nice thick towel in the color of his choosing. As soon as we got home and got them washed, up they went on the hooks. Now…NOW was the time for the Dance of Victory. Now would be when I could visit the bathroom and not shudder in fear of bacteria-laden fabric. I waited a day and checked.

This was the result. Inspiration wasn’t long in coming though. What we needed was a way to keep the towels from falling off the hooks. The solution? Sew a quick loop of fabric on the side of the towel to help in hanging. I bought a cheap washcloth from the store and cut it into strips. Each strip was sewn into a tube and turned inside out, then I roughly sewed the ends of the tube right on to the towel and voila! Most of the time.

Earnest Parenting: help for parents who want the towels to stay on the wall.