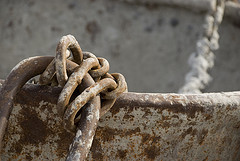 There are a lot of things that mystify me when it comes to my boys; the need to destroy-ahhh, I mean disassemble everything they touch, the constant violence, persistent bathroom humor…ugh. The biggest difficulty has been our differences regarding work. I think work is good. They do not.

It’s as simple as that, really. Unfortunately, I fear that if they don’t lose that particular ‘tude they’re going to be in for a world of hurt upon entering the work world.

Reality can be painful.

Plus? I’ve been more than a little frustrated with how much supervision and nagging seems to be required to get them to finish their work. I’m getting to that point in the summer when I look around and see more work than there is time or manpower to finish, and I’m stuck babysitting boys through work I want to trust them to finish.

Today again: disappointment. I checked in in how much grammar work has been finished and one boy was behind.

Not finishing his work but claiming that he has? Dishonest. I’m tired of being lied to.

I don’t want to send them off to public school, but if there’s not some kind of change in their behavior, that’s what will happen. I can’t live in constant anger or disappointment.

It used to be the case that Hubby would come home to me freaking out over their lack of work ethic. That’s happened less and less of late, but when he got home Monday it was the same old story. “I just don’t know what else to do,” I told him.

We talked. I expressed my frustration. Eventually, the new plan emerged. We’ve recently adopted a really neat allowance strategy. The (older) boys were getting $5 per week supposedly for doing chores on a list. Except that they were only doing said chores when an adult bugged them about it and followed them around making sure the work was done. Same frustration, different theme.

Effective immediately, everyone has received a pay cut. Allowance for the week is $3.50 (the younger boys have their own structure; they get less because they’re younger). IF the boys do their chores daily AND have an adult sign the checklist DAILY, then they can get a bonus amount and have their accustomed-to five dollars. If any of the conditions is failed, then they only get the base amount of $3.50.

It’s taken some time, but they’re finally understanding the system (read: paying attention to the explanations given ad nauseam). The Mercenary just heard me today on the whole “you have to get it signed before bed or no cash” thing. Heh, heh, heh. Boy did he ever jump to get his chore list and bring it to me.

The other major tweak was this: they have a deadline of 2:00 pm daily to get their schoolwork and chores done. If they miss the deadline, then any and all screens are off for the day. I’m sure we’ll have to live through a missed deadline before they take me seriously. But at least now I feel like I don’t have to nag. If they miss the time, boohoo for them. I’m busy doing my work.

Yes, I could have done this before, but for some reason it just hasn’t worked. I couldn’t figure out how to put the responsibility on them, and got frustrated with the constant chasing them around thing. I’m so thankful for the friend who recommended tying the signed chore list to money. It’s helping a lot.

Now if I could just get the older boys to do their grammar.