Adolescent vs Parent: I Don’t Like the Win/Lose Thing 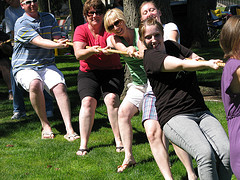 The Mercenary is well on his way to perfecting the adolescent sigh of irritation whenever I breathe. Yesterday I said to him “Hey, please take the sheets off your bed and bring them down to my room so I can wash them for you.”

His response was to roll his eyes, droop his shoulders and say in an irritated sigh: “Mom!!!”

Really? It’s annoying for him to perform a ten second task to help me complete a service for him??? He had gotten into some poison ivy recently, and I was concerned that his bedding may have some of the oil on it. Hence the desire to get it washed for him. But apparently my request of him was just too much, even though I made the request while I was in the kitchen preparing food. That he was going to eat.

Why is it that teens and pre-teens want to turn everything into a battle? Just because something is my idea doesn’t make it objectionable. Well. In my universe anyway. The boys appear to think differently.

We’re talking more about the whole thing over at GNMParents (now ForeverParenting) in my weekly post this week. Check out the comments as well. They’re pretty good!

Earnest Parenting: help for parents who want to avoid being adversaries.