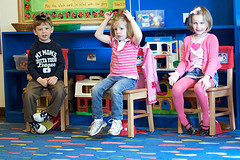 The future is a mystery, no one can say what it will hold – but if current trends continue, your child will grow up to enter a workforce in which the competition for decent-paying jobs will be nothing short of cut-throat. Despite the calls for greater co-operation and “interdependence,” human nature being what it is, it’s a good bet that the economy of the future will operate according to the Law of the Jungle. It goes without saying that a good education is one of the best ways to prepare that child for survival in that economic jungle of the future.

One of the future trends that has become certain is the existence of a diverse, global society and this rings true especially in the United States. Almost from the beginning, the U.S. has been a land of immigrants, and while the “melting pot” has been an interesting theory, it has not happened in practice. On the contrary, most major U.S. population centers have become more of an ethnic and linguistic checkerboard; Spanish, Russian, Vietnamese and Chinese speakers represent some of the fastest-growing segments of the immigrant U.S. population.

As China continues to rise, English may very well lose its preeminence as the international language of business; at best, it will have to share that top status with Mandarin in decades to come.

Traditional wisdom has been to start teaching a second language in middle school, or even high school. Yet numerous research studies clearly demonstrate that the optimal period in a child’s life for multilingual education is during the preschool years – at exactly the same time they are learning their first language. Yes, it is possible to learn a second and third language later in life, but it is more difficult, because that neurological “window of opportunity” – when the brain is most malleable – has passed.

According to Dr. Fred Genessee, Professor of Psychology at McGill University in Montreal, it’s as easy for young children to learn two or three languages as it is for them to learn one. He’s not alone; educators throughout the world (in countries that often have two or even three official languages) have understood this for decades.

The way a child learns a second language is by actually speaking it in a total immersion environment. You may recall an episode of the animated series The Simpsons in which young Bart gets trapped on a farm in France – and by the end of the episode, finds he’s actually speaking the language. While this was a fictional scenario, the phenomenon is real; anyone who has taken young children abroad to stay with relatives in a foreign country for any length of time has observed this happening.

Enrollment in a preschool or day care program that offers immersion in other languages is the best way to get your child started. This investment will make him/her much more competitive in the job market later on.

Emily and Kathleen are Communications Coordinators for the Atlanta day care facility, a member of the AdvancED® accredited family of Primrose Schools (located in 16 states throughout the U.S.) and part of the network of day care preschools delivering progressive, early childhood, Balanced Learning® curriculum.