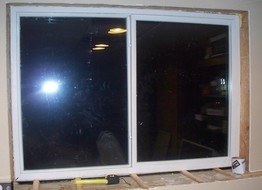 There’s a never-ending list of projects that need to be done around the house. One of them is a custom concrete ledge in the basement. A buddy of ours happens to be a concrete artiste and he’s going to help us with the project in a few weeks. One thing that has made me nervous is where the windows were placed; if the wet concrete ran over the edge and into the track that would be bad.

So! Ever the problem-solver, yesterday I started pulling siding off the house (in November!) and I took out two windows, then had the boys help me set them back in higher with some shims. Hubby was wonderful enough to stay home and tape the outside into place last night. Today I replaced the siding and moved around to the next side of the house where the third window waited.

TechnoBoy enjoyed pulling nails yesterday and graciously agreed to come out and help me get the siding started today. I couldn’t hold up the first piece by myself. He took the hammer and got to work. After we’d gotten the first piece up he stayed out to help. I slid some pieces into place and went to remove the other siding while he hammered. I kept hearing “ouch!” and other painful sounds as he smashed his fingers. He turned down several offers of help and finished some siding pieces all by himself. Then he went inside to nurse his poor hands.

I finished taking siding off down to the lowest row and was appalled to find thousands (thousands!!!) of boxelder bugs attempting to hibernate on my house. Ewwwwwwww! I looked in the window to ask for moral support and no one was around. So I tapped on the window. No more than ten seconds passed and TechnoBoy burst out of the door. My hero!

I asked him if he’d be willing to come be disgusted with me and he cheerfully obliged. When I showed him all the bugs, he grabbed the bug spray and offed them all. Bleh. I don’t mind bugs as long as they stay out of my house. (shudder). I decided to go back to the first wall to work while the spray dried, and was surprised when TechnoBoy came around the corner to inform me that he was going to get the broom to sweep the bugs away. I suggested the shop-vac, which he quickly fetched and started using.

We agreed that The Mercenary really needed to share the experience. It was pretty funny seeing him get grossed out. He refused to do any vacuuming, especially when TechnoBoy told him that it was possible to feel the bugs going through the hose while holding it.

The Mercenary instead helped me hang the rest of the siding, then both boys retreated to the safety of the house. Later when I asked, they helped me and Hubby get the last window set properly. Hubby stayed home from Tae Kwon Do to help get the project finished (which was so wonderful because the temperature dropped and the wind was blowing and it was COLD out there).

The windows are all fixed, now we just have to finish the prep for the concrete. Hopefully a few weeks from now we’ll have that project done! I couldn’t have gotten this much done without my boys’ help.

Earnest Parenting: help for parents of tweens that can occasionally be useful.