Talk to Your Kids About Tattoos 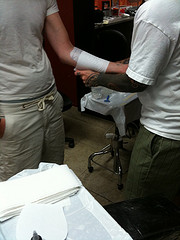 (Editor’s note: please welcome this week’s guest author, Janet Peterson. She has excellent advice for anyone with a teen that wants a tattoo. I know we may have this conversation someday. Thanks Janet!!)

Kids want a lot of stuff. We get used to them chanting “Can I have that??” through the years and when it’s stuffed animals and comic books it’s not so bad. But what happens when they get older and things get more complicated? Requests for toy cars turn into pleas for real ones. And some parents will have to deal with even more horrifying prospects, like teens who want tattoos. With any luck your kid will be the squeamish type. But if they are the kind who actually wants to go under the needle, here are few tips on how to survive this particular cringe inducing conversation.

It’s easy to hit the ceiling, when your 16 year old looks up over the table on Taco Night to announce that he or she wants a tattoo. Sentiments like “Are you insane?” and “Over my dead body!” may immediately spring to mind. But it’s important to curb those initial instincts, even if only temporarily. In all likelihood the teen realizes that this request is going to create controversy. Let’s be real, teens know when they have dropped a bomb, and when they prepare for fallout, it means digging in their heels. They will be prepared to fight, so in some respects it may be best to avoid one altogether.

Ok, for argument’s sake, let’s look at ear piercing for a moment. Many young girls have the experience of getting their ears-pierced as a rite of passage. Mothers and daughters often take the trip together, they bond over choosing that all important first pair of earrings. And in that moment when the earring gun shoots through an ear lobe, a girl squeezes her mother’s hand and in that clasp, there is an exchange of love, strength, need and pride. When it’s all over, the child also learns a bit about responsibility by having to administer their own post-piercing care. Most people don’t even bat an eyelash at any of this. And yet, a tattoo on a 16 year old can feel wildly out of place, even though the process of getting one could involve many of the same opportunities for bonding along with similar lessons in responsibility and good choices.

Obviously ear piercing and tattoos are not the same. There is more involved, the risks are higher and as a social norm it is much different. But they do have a lot in common. Both are forms of expressive body modification that require the child to exhibit a certain degree of maturity and personal responsibility. Because of these similarities, it is difficult to summarily dismiss the notion of getting a tattoo as ludicrous. And if you do, you run the risk of putting more strain on the naturally trying relationship between teen and parent. Just take a moment to breathe, let your psyche absorb the shock, and then ask the single most important question you can in this situation… “Why?”

Let Them Make Their Case

Chances are, there’s a reason your teen wants a tattoo. Presuming you can get more out of them than half a shrug and an “I dunno, I think it would be cool”. The best thing you can do is listen to their reasoning. Is it a peer pressure thing? Or is this a desire for self-expression? Most teenagers are dealing with a difficult dichotomy; it’s the desire to exert their individuality while still fitting in. For some teens, tattoos are the perfect combination of edginess, self-expression and rebellion. It may seem that with one ink-laden needle they can assert their independence while simultaneously impressing their peers with their, for lack of a better term, bad-ass-ness. But the fact is most teenagers lack the emotional maturity to make the distinction between a temporary high and a sound long-term decision. The most important thing you can determine during this conversation is where this desire for a tattoo comes from.

Odds are this is a whim brought on by some recent event. But there is a chance that there is more going on, and that this sudden urge is actually symptomatic of a much deeper problem. Is there a chance that the child is depressed? Do they feel lonely, ostracized or bullied at school? Or, do they just feel invisible? Granted it’s just as possible that the inkling to get a tattoo was brought on by a recent episode of Jersey Shore. But you won’t know until you talk it out, and flush out the subject fully. Find out what exactly the child wants an image of. Perhaps the recent loss of a pet or family member has made them long for a way to tie themselves permanently to a memory. Ideally, you’ll discover that their reasoning is shallow and superficial. In which case, it’s easy enough to refuse to give parental consent. But in some cases, this question becomes an opportunity for a real heart-to-heart between parent and child.

This confrontation can become a meaningful dialogue as quickly as it can become a screaming match complete with “I hate you’s” and door slamming. Let’s pretend for a moment, that you are a parent with tattoos yourself that you still take pride in. Perhaps you also have a very, intelligent, mature well-balanced teenager who is looking for a tattoo that is truly filled with personal meaning. Can you condemn the act based solely on age? Honestly, I’m not going to begin to try to answer that question. Because it’s SO personal that the answer truly is different for everyone.

It can be harder to give a flat-out no if you have tattoos yourself, and even if you don’t shutting down the request without giving a good reason is only going to lead to more contention. If you don’t feel like a tattoo is a good idea for your teen, tell them why in more words than “Because I said so.” The truth is many young people who get tattoos at a very young age wind up hating them later. We are constantly evolving in our lives, our tastes, our priorities, and what we think is “cool” changes from year to year. When we’re in our teens, it can be hard to grasp the enormity of the future. It seems far off, unreachable and the idea that we may carry deep regrets from our formative years seems impossible. That’s why this particular scenario is a perfect opportunity to connect to your teen.

By sharing a personal experience, you can turn a dispute into a bonding opportunity. Even if you didn’t do anything comparable to getting a tattoo there must be something in your past that you wish you could go back and undo. Relate that tale, talk about regret, and the ramifications of our choices. You can also enlist the aid of someone who does have genuine tattoo remorse. Find an adult who has ink they regret or have had covered, and let that person tell your kid their story.

If all else fails, talk about pain and infection. Most people are aware that there is pain involved in the tattooing process, but they think they can handle it. Make them aware there is no anesthesia involved. After the tattoo is done, there is also a lot of after-care necessary to avoid infection. And infection can hurt like hell too. Oh and if they think “Hey if I change my mind I’ll just get tattoo removal,” inform them that the laser tattoo removal process isn’t painless either, or cheap.

It’s no easy feat to change a headstrong teenager’s mind when they become fixated on something. Accept that you may not change their minds, and they may not change yours but it’s still important to have a conversation rather than a fight. When it’s all said and done, you may inevitably have to be the bad guy and say “No” regardless of how mature they are or sound their reasoning is. But if it comes to that, at least you’ve stayed calm, taken the time to listen and opened up to your child about why you are against it and all of the consequences they may not have anticipated. So while your son or daughter may still resent your response they will have to respect your reaction. The truth is, in a few years your teen will be able to legally get one with or without your permission. Forbidding one now, without having a meaningful talk about the risks and realities only prolongs the inevitable.

Janet writes for a clinic in Houston offering laser tattoo removal. She has been a blogger and freelance writer for a number of years and has seen more than her share of people whose teenage tattoos become a source of regret.

Earnest Parenting: help for parents of teens who want tattoos.