FFYF: Put Your Toys Away Edition 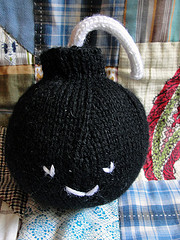 I could NOT resist this topic for my Fun For Your Friday submission this week. There was a bomb scare in Florida last September, and I forgot about it until just now. A stuffed toy horse was discovered just sitting out on the sidewalk (and apparently it had some wires and/or batteries that caused concern). A full bomb squad contingent was called to the scene, and they investigated. Eventually they decided to blow the thing up. As of the writing of this post, nothing untoward was found in the remains of the explosion.

It’s hard to avoid thinking though that some kid left that toy out. Can you imagine coming home from school only to learn that your toy horse has been destroyed by a bomb squad? Just think of the possible parental response: “See what happens when you don’t take care of your toys honey?”

If you were the parent of that child, would you admit to owning the toy?

Welcome to the January 28, 2011 edition of fun for your friday. Joanaa Tiger presents 15 Most Bizarre Laws That Are Still on the Books posted at Criminal Justice Degrees Guide.

Mark Johnstone presents Funding A Masters Degree posted at Postgrad Blog, saying, “A little tongue in cheek (with some nice design) this post lists 7 creative ways to pay your way through university.”

EGB presents The Napping Window posted at The SAHMnambulist, saying, “The trials and tribulations of trying to get my 4 month old son to take a nap.”

Earnest Parenting: help for parents who might want to blow up a toy or two.