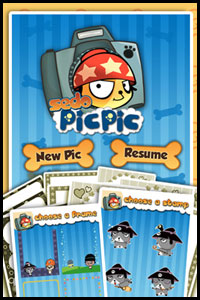 I was contacted recently to review an iPhone/iPod app called Sedo Pic Pic. This program is pretty neat, in that it lets users put frames and stamps on photos in your phone’s gallery. I had The Mercenary take a look at it, since he’s got an iPod and is quite creative with photos and the like.

The Mercenary reports that it’s a good looking app with lots of great features. When we first got it, it crashed repeatedly. However! I’m thrilled to report that the programmers came out with an updated version and my boy says it’s SO much fun now. He really enjoys using it, and said it’s the best photo-editing app he’s seen for the iPod. This from a boy who has about ten similar applications, and 161 applications in total on his iPod.

My boy: the app addict.

Earnest Parenting: tips for parents who want to know about iPhone apps.

**Disclosure: I was given a free copy of Sedo Pic Pic in order to write this review.