Parenting Teens Can Cause Gray Hair(s) 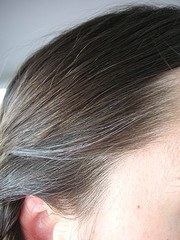 There are many times in the parent blogging experience when you have to decide how much of a story to share; protecting privacy is important so please understand that I’m walking on fine lines here. I’m going to write the real story down and share it someday. Right now I can only offer generalities. I think those are useful though.

One of the boys was…offensive. As it happened, he chose to make his mistakes rather publicly. Nothing like social networking to magnify foolishness, let me tell you. Thankfully all of the mistakes that Hubby and I were able to track down were deleted so at least it’s not all out there anymore.

What boggles my mind is the fact that his words so totally did not represent anything we stand for. When we objected he didn’t move to solve the problem until consequences started getting discussed. From our vantage point the whole thing looked like a massive train wreck, and he wasn’t even taking action at all. I still don’t get that.

A very wise friend of mine said that he’s experimenting with who he is, and he’s going to make mistakes. That is grounding me quite a bit. I sure hope he chooses to like himself as a decent human being.

The foolishness wasn’t the only problem. This weekend, he was deliberately dishonest with both Hubby and I separately. We each asked the same question (not knowing the other parent had also asked) and each got the same answer. I fully expect the boy to claim ignorance when we confront him tomorrow. We know how smart he is though, and we’ve decided to respect him enough to hold him accountable for his actions. This? Will not be pleasant.

On a greater scale, as parents we’ve hit a limit. While we have known in our heads what was necessary to bring up the boys, in our hearts we’ve been soft. That softness has reached its limit. I’m not planning to ship anyone off to military school or boot camp. However, I am planning to expect people to contribute some actual work to the betterment of this household.

In the past I’ve made resolutions to the effect that “From now on, so and so is going to do such and such” and they’ve lasted all of two days. That can’t happen anymore. I have to be consistent with the boys, even though it’s hard. The cost of being inconsistent is getting too high. Growing up to be their own men is exactly what Hubby and I want for them; we’re not trying to control their every facet of development. We do want them to have some basic values and traits, kindness and honesty among them. It’s still our job to parent, to lead, and to set the structure.

I explained to the younger boys today that there are 6 people living here and it’s just not good math for 1 to be doing most of the work. Then we went out and did some work and (gasp) had fun doing it. Who woulda thought? I’m not expecting it to be that easy with the teens. After all, I’ve let them slide too much over the years.

Time to fix that problem.

I’m not angry with my boy, but I am deeply saddened by his actions. I’m concerned that what we’re seeing is where he wants to take himself. I hope that it’s just a bad experiment and that he turns out to be as sweet and wonderful as I know he can be. Ultimately he’s going to be the one deciding the answer to that, not me.