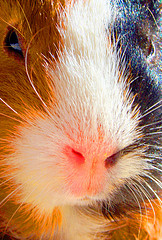 So, I gave my kid’s pet guinea pig away a couple of weeks ago. No kidding, I really did. As I shared with my newsletter readers, it was a tough day for all of us, and both Hubby and I felt just awful about it. Captain Earthquake had been refusing to control his temper with regard to having to do barn duty at the fair. After two hours of really awful behavior, the solution seemed simple. I looked at him and said, “This is easy. Boys who don’t own guinea pigs don’t have to do barn duty.”

He refused to calm down so I asked Hubby to bring in Buddy and we gave him back to the 4H leader from whence he’d come. The Captain was brave through the whole thing, and then went home and sobbed as Hubby said he’d never sobbed before.

We told him that he still had a chance to get his beloved pet back, but it was going to take some serious control on his part.

We planned with the 4H leader to reunite him with Buddy the following Sunday. There were some massive changes in schedule to do flooding and the fair being canceled, so we actually got the little guy back that Thursday. In the meantime, the Captain controlled himself both in discussions with older brothers who love to push buttons and when I scheduled an additional barn duty time for us. He definitely loves his pet, and most definitely earned him back fair and square.

Fast forward to this week, when a very tired family arrived home from Cub Scout camp and a weekend celebrating Grandma and Grandpa’s 50th wedding anniversary. On Sunday evening when it was time to go to Community Vacation Bible School, the Captain lost his temper all over again.

There was no way to avoid going, the whole family was expected. I cheerfully told him that he could consider hiring a babysitter for himself on Monday night but that he’d need to expect to pay about $9 for the supervision. Either way, he was going to have to go with us then. Which he did, and proceeded to have a wonderful time. This was not surprising.

I thought that he was on board for the rest of the week and he surprised me by having another fit about VBS on Monday night. Because I had anticipated incorrectly I hadn’t made any babysitting arrangements.

So there we were. I got rather irritated because he only throws fits like this for me and not Hubby. Faced with few options, I told him that this out-of-control temper thing had to stop. He’d been at home all day playing, and going to have more fun at VBS was not something people get angry about. We were going to go.

I reminded him about the whole guinea pig incident and told him that he was fully capable of controlling his temper. If he did not, we were going to lose computer privileges a week at a time, and if he lost his guinea pig again that it would be permanent.

Heroes, I was NOT joking.

Thankfully, he believed me and has had both his sweet pet and computer time to enjoy this week.

And what do you know?? He’s had fun at VBS too.