Got An Angry Kid? Read This Book 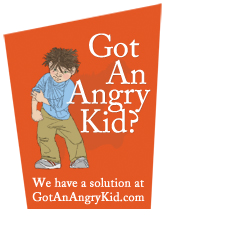 Good Tuesday, Heroes!  I recently became aware of the book Got An Angry Kid? Parenting Spike, the Seriously Difficult Child.  This book ROCKED my world.

As you may know, I’m a committed proponent of the Love & Logic approach, child training a la Michael and Debi Pearl, and a generous dollop of “child whispering” by way of Cesar Milan’s Dog Whisperer techniques.

The problem was, as much as I believed in all of that, I frequently found myself yelling angrily at the boys, tossing all my philosophical beliefs out the proverbial window. Much of this summer has been lived in frustration, because I genuinely didn’t know what to do. My friendship with the boys (especially The Mercenary) has usually improved over the summer months, but not this time. I was just as tense with them in August as I was in June. That’s not good.

All I could do was complain, which didn’t make me too much fun to be around. And I saw no solution to the problem other than reduce my contact with the children until they do some growing up. That meant public school. As much as they drive me crazy though, I don’t want to do life without them. I don’t have a huge problem with public schools in general, but it’s just not the option I’d like to take just this moment. And certainly not out of anger or frustration. That’s not healthy for any of us. If a boy or boys choose to go to school on his own, then that’s fine. Me forcing them to go because I’m giving up on success? That’s not good for anyone.

Dr. Andrew Gibson contacted me a few months ago about reviewing his book. It took me a while to get my hands on a copy but wow am I ever glad I did. Got an Angry Kid is PACKED with wisdom. More than once I nodded along with my reading or insisted that another adult nearby listen to me read some of the lines on the page.

And? This book actually gives you a rock solid plan for how to get yourself to the goal line. Much of my frustration with Love & Logic revolves around two things. First, I’m not naturally wonderful. I tend to be less emotional and less understanding than the book requires. Second, I don’t always have the outside backup that families in public school experience.

Say for example a kid is staying up too late. If I let them go at it (per the Love & Logic book) then when they’re tired the next day, it’s me fighting to get their attention and cooperation, not the teacher that has the benefit of peer pressure and structure on his side. That can be really hard. And as soon as I was angry, I’d pretty much lost the argument anyway. None of the 3 philosophies I love say that you can get angry at your kid and be successful.

Got An Angry Kid? gives you an actual plan, step by step, for getting from the angry frustrated parent to the calm peaceful and loving one. Literally! Each week is a new step, and if you make more than 4 errors on that step, you stay there the next week and try again. You never move on to a new skill until you’ve mastered the one you’re on. I love how structured that is!

I’m using the book as a self-help system, but there’s also a much more comprehensive support system and structured program for parents. While I don’t have an angry kid on the level described in the book, I was on my way to creating one. I’m thankful to have this book as a starting point for improving myself and eventually my family.

If you have an angry child, or if you’re feeling angry about your child, read this book. It’s not easy, but I’m confident you’ll be glad you did.

FTC disclosure: The links (coming soon!) to Got An Angry Kid are affiliate links and I earn money if you purchase the program. I am a strong supporter of this system because I’m using it myself. (I’m on step 2 this week.)