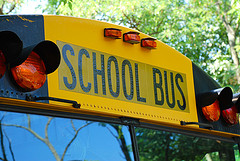 So. Being that I’m the parent of two 13-year-olds, we’ve been experiencing a lot of teen angst around here. Usually every summer follows a similar pattern: we’re all sick of each other by June, but we have lots of fun and togetherness (and some time apart) and we’re back to loving each other by September when school begins.

This year, we clearly were not following that pattern. The whole summer was just brutal with controversy and disrespect and far too much arguing. I looked at the boys in August and said, “You don’t respect me. How can you learn from someone you don’t respect? I think you need to go to public school.”

The Mercenary said no way. He’s not going to take that risk. TechnoBoy on the other hand, said, “Yea. I can do that.”

I actually didn’t believe him and was taken by surprise a few weeks later when he said something in passing about going. As it turned out, the next day was Open House, so we hurriedly enrolled in the early afternoon, and by evening he was all scheduled and walking around the building meeting his new teachers.

I’ve never been the parent of a public school student before, so this has all been quite new. I went to public schools all my life and taught in them for 8 years, so it’s not completely foreign. But seeing it from this perspective is so totally different! I felt nauseous and short of breath for a few days, and I cried at Open House.

Note: The crying was related to far more going on than just him going to school. The dishwasher broke, the microwave died, the repairman didn’t show up TWICE-and I waited 4 hours for him each time, ten cavities were found in various boys’ mouths, I ended up getting a complete allergy testing and exam instead of just a quick check-in with the doc, during which appointment the phone rang from boys no less than 12 times so they could complain and fight…It was a terrible horrible no-good very bad week.

While we were walking around meeting teachers that night, it felt very…right to be doing this. Because it was my boy’s choice and not mine, and because he was so easily fitting in with all the friends and parents he already knows, the transition hasn’t been very difficult at all. Granted, he’s had some stressed moments, and there are sure to be difficulties to come; but that happens no matter where you are in life.

I’m super proud of my boy. He took a risk and he’s doing well. I’m glad he’s getting a chance to shine without his twin overshadowing. He’s getting to have his own identity. Last night he brought home some papers and The Mercenary took it upon himself to read through them and critique everything. I pulled TechnoBoy aside and told him, “If you play your cards right, he’ll do your homework for you!” Then we shared a laugh. Editorial note: it wasn’t homework, it was just class notes that TM was reading. No homework was performed by the wrong person. Thank you.

So yea. I am now the parent of a public school student.

I do miss having him home though.

Earnest Parenting: help for parents whose kids go from homeschool to public school.