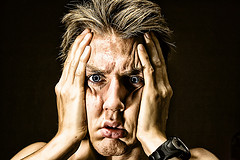 So yeah, 2011 has been a…very full year. The summer in particular was just brutal, I’d have to say. See, Hubby and I decided in May that we need to put the house on the market and see what God does with that. Basically, if the house sells in this economy in our rather out-of-the-way location at the price we name that’s a miracle. A Realtor came out and looked things over and gave us a list of things to fix up before listing. I quickly named it the Jaw Dropping Todo List.

That was in May.

Now that we’re in December, all of the outdoor tasks are done and much of the indoor. I keep looking out the window at the landscaping (deck, patio, 3 yards of sand, 4 yards of stone, and 19 yards of mulch) and marveling at how neat everything looks. It gives me great encouragement.

Many of the jobs I did were ones I’d dreaded for years. That dread built up and made it harder for me to even think about starting them. I didn’t think I could possibly stand to spread mulch again; I burned out on that job a few years back. But, working on it one load at a time helped and now it’s done. Except for the bed I didn’t do, but that’s next year’s task. If we even live here.

So many times I would get tired and wonder if it was possible to finish, or if I even wanted to. Take for example the exterior light job. There are 6 large brass fixtures around the house, and they were all weathered and looking terrible. I contracted with TechnoBoy to have them taken down and painted black. Everything was going along well when I broke one. Then I broke another. And of course the hardware used was not available locally, so Hubby and I had to completely rebuild the fixtures from the inside out. This? Was not fun. And it took a long time. We just kept picking away it it though, and now I have all my lights back up and looking new.

If I had to choose a word to describe our progress over the summer, it’d be “grinding”. We just kept moving forward, dealing with setbacks, and moving forward again, until it was done. The Jaw Dropping Todo List only has a few items left, and then I can make a new list of the current jobs remaining. That will probably be jaw-dropping again, but at least I can look at existing progress if I get tired or discouraged.

Over the past year I’ve had times of equal disappointment and exhaustion with regard to parenting. There are just times when you wonder if they’ll ever understand what you’re doing. Or if they’ll care. In those moments I try to imagine THEM being the parents and dealing with all this nonsense from my grandchildren. Then I resolve to laugh heartily at them if they complain to me.

I’m writing about all of this here today because I want to encourage you. If I can make it through all of that, anyone can. Maybe you’re facing a mountain of work, or you’re looking at a teen child and wondering if he or she is going to make it to 20. Here are a few of the lessons I (re)learned this year.

1)Just get started. Often the hardest part of any job, because you’re dreading the work. Usually that dread is overblown and if you just take the first step, it’s not as awful as you’d anticipated.

2)Get help. I was almost sick to my stomach about the landscaping work, so I hired a company to help me get started. Just two days of work from them was enough to get me going (and they moved the really heavy stuff I couldn’t).

3. Don’t quit. This one applies to jobs and kids. Getting the work done was mainly a result of doggedly plodding forward, and doing work even an hour a day, just to get done. As for kids: they may not listen the first time, but sooner or later they WILL notice me and what I’m saying. Plenty of times I felt like ripping out my hair and throwing it at them, but there were and continue to be moments when I’m able to get their attention and actually connect. I just have to keep trying.

4. Look at past progress. One of the best ways to get yourself fired back up. Look at the finished yardwork, or the painted bedroom, or at your child. There was a time when you thought he’d never get potty-trained, and here you are…diaper free. Or maybe you thought she’d never learn to read, and now she does her book reports without assistance. No matter what challenge you’re facing now, it helps to remember that you made it this far.

You can make it all the way.