Purex and Jockey Team Up to Make Sportswear Comfortable 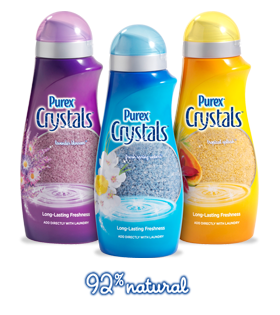 Be sure to check out the end of the post for a special offer from Jockey and Purex!

Did you know that fabric softeners can contain oil which should not be used on performance sportswear and underwear? I had no idea! It turns out that oil can prevent the wicking process, which reduces the effectiveness of the garments.

Jockey has teamed up with Purex and as a result, I got a sports bra and bottle of the new Purex Crystals fabric softener to try out. Jockey sent me their Tech Terry Performance Sports Bra. The fabric is moisture wicking with breathable mesh panels and soft bottom band for comfortable support. There’s also a convenient key pocket right there in the middle, but I’m not so sure I’d ever use that feature. For one thing, I have a bunch of keys on my ring, and for another the idea of a cold piece of metal against my skin sounds…uncomfortable. But that’s me. I don’t like cold.

The bra was very comfortable, although I did struggle a little to get into it. And wow was it ever supportive! EVERYthing stayed completely in place during the workout, if you know what I mean. In addition, I didn’t have to keep adjusting straps while I was on the elliptical machine. As promised, the fabric stayed cool and comfortable for the entire workout. However. Getting out of the bra was very difficult and I was briefly concerned that I’d have to gnaw my way out of it. In hindsight, they may have sent me a size too small.

It wasn’t so tight that I couldn’t breathe, but getting it over my shoulders was difficult and wrestling my way out of it a bit scary. If you buy one for the first time, I’d recommend getting help at the store to be sure you have the right size.

Jockey’s Tech Terry Performance Sports Bra is machine washable AND dryable, which is another plus in my book. In a house of 6, I’m not always the one doing the wash and it’s nice to not have to worry about a garment getting ruined accidentally by a ‘helper’.

I also tested out Purex Crystals fabric softener. I received a small sample last year at BlissDom, but hadn’t tried using them. I hadn’t understood the oil thing, so just kept on using my usual softener. Now I know to use the crystals for athletic wear and underwear in particular.

The crystals go right into the washing machine with your clothes, not into your usual dispenser. We got a large bottle of the Tropical Splash scent, and the smaller bottle I got last year was the Lavender Blossom scent. I prefer the lavender, but I’d like to try the blue Fresh Spring Water before making a final decision. When you get the wet clothes out of the washer, the smell is super strong. I was a little concerned, but by the time the clothes were dry they smelled very nice without being overwhelming.

Purex Crystals fabric softener did a good job of softening the laundry and managed to keep static cling to a minimum with everything but loads containing polar fleece items. I also noticed a bit of static on loads that were dried longer. The amount of lint produced by the dryer was lower than my usual softener produces. So overall I’m very pleased with the product and plan to pick up a bottle the next time I’m at the store.

In case you haven’t clicked yet, you can get a 20% off coupon on your Jockey purchase just by clicking the Sports Bra link. And! Come back tomorrow to enter to win a super prize from Purex and Jockey!

FCC Disclosure: Jockey and Purex provided free samples of their products so I could review them. However, all of the opinions expressed here are my own. Especially the part about gnawing off the bra.