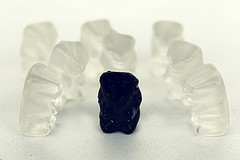 One of the 9 year olds made a comment the other day that something or other was black, and his twin immediately accused him of being racist.

I called them over to chat, and eventually determined they’d learned from older brothers that talking about colors like brown or black was racist. (Made note to self: repeat this discussion with older boys STAT.) Then I explained that true racism is believing that one person is better than another based only on the color of their skin. Which is ridiculous. Skin color doesn’t automatically make anyone better. Or worse.

Then I explained that we only accuse of racism when that exact situation happens: when they see someone hurting another person because of skin color. If we go around accusing people of it willy-nilly, then two things happen. 1) People live in fear of unnecessary reproach and 2) Real racism could get ignored.

When people live in fear of unnecessary reproach, they curtail their own speech and get into the land of Political Correctness, which quickly becomes insane. (That’s a rant for another day.) And if real racism gets ignored then someone is getting hurt. As Christians, we’re called to treat other humans with love and respect. Racist behavior definitely doesn’t meet that requirement.

Later on last night I talked to the older boys about it. When I got to the part about real racism, The Mercenary said, “I’ve seen real racism happen.”

“I’m sure you have,” I said. “Did you confront the person at the time about it?”

And that’s another part of the definition of racism. When it’s truly happening you’re witnessing hate, and that can be scary to confront. Especially as a very young person. I don’t blame him for not speaking up; it’s something I hope he learns to do though. In the meantime, we’ve got it defined and we’ve talked about how evil it really is.

Hopefully by treating the subject seriously and by helping them know what not to take lightly, wisdom will take root in their hearts.

Have you talked to your kids about racism?

Earnest Parenting: help for parents who want their kids to love all humans equally.