Orthodontic Work Can Stress Kids Out 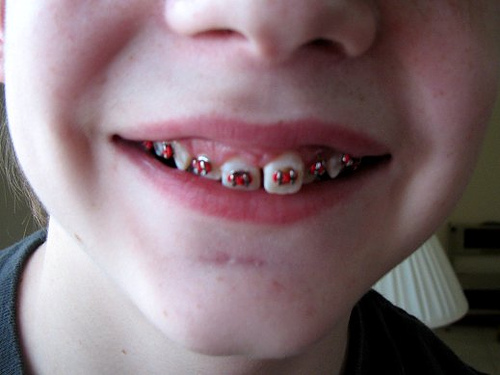 So, the younger boys have needed some orthodontic treatment for quite a while. We bit the bullet a couple of months ago and had them evaluated. Each needed an appliance installed to straighten out their bite and avoid surgery in the future.

This has not been an easy process. Both boys were less than pleased about the prospect, even though we explained very carefully that the risks of NOT getting treatment were much greater than going through with it. They’ve been as cooperative as they could be overall, but there’s definitely been some tears and frustration.

The appliances were installed yesterday, so learning to speak around them and to eat without food getting stuck is still ongoing. Captain Earthquake informed me last night that he was starting to adjust (his appliance is less intrusive), while The Manager was still sad about it this morning. I expect that we’ll still have some down times for a while. Neither one of them has played outside in the cold weather yet and I’m betting that will be a bit rough.

Yesterday before the appointment, the Captain in particular was very irritable and ready to pick a fight with the world. After the appointment, The Manager refused to eat or talk for several hours.

Rather than argue, I just let them be as much as possible. The Mercenary was around all day and it was difficult for him to leave them alone but we worked on it. He wanted to make sure eating was happening. I said that he’d get hungry sooner or later and to just let him alone. Sure enough, he ate dinner.

I offered to do a fun thing or two right after the appointment, but neither boy was in the mood to do anything but go home. So that’s what we did.

In general, when a child is freaking out over a situation of this magnitude, here are the important steps to take.

One of the best things you can do is just be there. Last night we watched four television shows all snuggled on the couch together, then sent the boys to bed. If rotting their brains out in front of the boob tube helps, then do it. They’ll settle faster and recover better from the stress.

What do you do when your kids are stressed?