6 Tips For Decorating a Boy’s Room 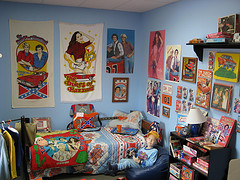 “Boy, n.: a noise with dirt on it.”- Not Your Average Dictionary

The transition to a big boy room marks a huge milestone in a boy’s development. If he’s used to sleeping with a sibling, however, this transition can prove challenging. Young children frequently experience anxiety about sleeping in a new bedroom, but designing your son’s bedroom in a way that feels comfortable to him can help him avoid some of this anxiety.

While girls often have strong opinions about how they want their rooms to look, many boys think that decorating is stupid and are unwilling to give much thought to the process. This means creating a room your child will love might require some extra creativity and subtle pressure, but with the right approach you can get your son involved in the way his room ultimately looks.

If your son can’t answer questions about what he wants in his room, try a different strategy. Think about your child’s favorite characters from books and movies, his favorite superheroes and his hobbies. Ask him, “Would you like a superman room? How do you feel about having ninjas?” Wait for something to pique his interested and then run with it.

Think Ahead
Spiderman might be the coolest thing ever today, but as a teenager your son is likely going to be embarrassed by his childhood interests. Avoid painting designs or adding wallpaper that will be difficult to remove in a few years. If your son wants a room covered in action figures, try using removable wall decals or adding framed photos rather than painting them on the wall.

Choose a Bed
The bed you choose for your son will set the tone for his entire room. It can also affect his ability to sleep at night. Captain beds are excellent options for boys. They can easily be turned into forts and other fun structures, but are generally small enough that they won’t take up all the space your son will need to play and be a kid in his room.

Try adding extra decorations to your son’s bed. This is a great way to personalize his room without setting up permanent structures that he might hate as a teenager. Consider decking his bedding out with images of his favorite superhero, sport or video game. This is especially helpful for boys who are anxious about sleeping in their own rooms. Try telling your son you’ve put a superhero on his bed to protect him at night.

Avoid Stereotypes
Many parents are eager to decorate their son’s rooms with sports heroes and action figures. But many boys have a more sensitive side and would be just as happy with a room covered in stuffed animals. Although parents are often reluctant to allow their boys to pursue “girlie” pursuits, gender stereotypes can be harmful to your son.

Most developmental psychologists agree that boys benefit from play kitchens, stuffed animals and similar toys that teach them nurturing and other important skills. When parents don’t let boys have these items, it can actually teach sons to devalue and disrespect women. If you have a more sensitive boy, indulge his interests and allow him some control over his room. Just make sure that, if his interests change, you can easily move the stuffed animals out and the actions figures in.

Minimize Fear
Although all children are prone to nightmares and bedtime anxiety, fear at night can be especially problematic with boys. Boys tend to become aggressive and disobedient when they’re feeling fearful because it can be difficult for them to talk about feelings. Don’t allow your son’s tough exterior to fool you! Plan ahead for potential sources of fear.

Give your son a big, cool-looking flashlight to keep under his bed and ensure that he has a nightlight. If he wants to sleep with the lights on, allow him to do so. This can help him transition into his new room. Check his room for potential sources of anxiety. Are there weird shadows? Strange noises at night? Position furniture in a way that minimizes shadows and, if possible, choose a quiet bedroom located near yours.

Give Him Control
Once your son gets involved in the decorating process, his creativity can be very impressive. Unfortunately, some of his ideas might seem a little strange. As long as he’s not permanently altering structures or coloring on the wall, allow your son substantial creative license in organizing his room.

Children generally feel more secure and behave better when they have control over their own lives. Your son’s room is an important part of his identity and is his safe harbor away from the stresses of daily life. Allow him to design his safe harbor in a way that feels right to him, even if it seems a little odd to you.

Staying quiet is difficult for Christobel, as she has spent her life in marketing. She loves being a grandmother, and is slowly learning to keep her mouth shut. She enjoys buying presents such as twin bunk beds with stairs for her grandchild. **Editor’s note: In the late fall of 2014, Christobel passed away unexpectedly. She is deeply missed by both family and friends.

Earnest Parenting: help for parents who want to decorate a boy’s room.