5 Trivia Games to Play at the Park 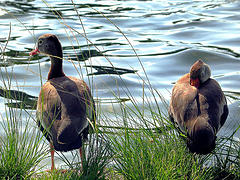 The park is a relaxing setting that quietly requests those that enter its hallowed gates enter with fun on their hearts and minds. It’s only fitting that any games that you play while in the park are fun and stress free forms of entertainment. Music always adds an extra dimension to any gathering and a music trivia game just adds that special touch to an already fun afternoon. The group of people sharing an afternoon together probably shares a similar interest in one or two sports, so naturally a sports trivia game can keep the gang excited for a few minutes. You could follow that with something more nationally significant like a presidential trivia game. It has a serious undertone, but it will all be done in fun. If you’re looking for a fourth or fifth trivia game to extend the fun you’re having, how about an Oscar and a pop culture trivia game? They’re both fun topics. Everyone loves the movies and we all like to believe we’re in the know about current trends. Isn’t it funny when we discover how little or how much we actually remember?

Music trivia can be very challenging. You can ask questions about a particular artist, like what was Clay Aiken’s first album title? Answer: The Measure of a Man. Or something more challenging like which state was the birthplace for John Cougar Mellencamp? Answer: Indiana. It doesn’t matter which genre of music you prefer, there are trivia question for Hip Hop, R&B, Country music, Jazz, Classical instrumental and opera plus many other categories.

Unfortunately, sports trivia isn’t a love that’s enjoyed equally by both genders, but every group is different. Your group of friends may contain male and female sports fans. Hopefully it does. If so you’ll love asking questions about who swept the Boston Celtics in the 2003 playoffs? Answer: The New Jersey Nets. If you missed that question just wait until we get to the football questions. Which Atlanta Falcon was named player of the year for two consecutive years, 1991 and 1992? Answer: Deion Sanders. Sports trivia can be played with baseball, hockey, tennis and golf as well.

Presidential trivia is always very revealing. Find out who paid attention in grade school with these fun questions. Which president had a famous dog named Millie? Answer: George W. Bush. Who was the first president to visit China? Answer: Richard Nixon. Who was the only president to wear a beard? Answer: Abraham Lincoln. Presidential questions can also be obscure like, how many times have father and son served as president of the United States? Answer twice or for four terms with John Adams and his son, John Quincy Adams and George H. W. Bush and his son, George W. Bush.

The Oscar trivia game can be a host of fun because it requires an excellent memory. During WWI the government asked the motion picture industry to do what for the armed forces? Answer: Train Signal Corp. Officers to make military training films. Which network was the first to air the Oscar Awards on TV in 1953? Answer: NBC. This super fun category makes you rack your brain in search of the answer to questions you always feel you should know.

Pop culture trivia is composed of current day questions. According to the Simpsons TV serial a Flaming Moe is made of what secret ingredient? Answer: children’s cough syrup. In what TV show did the character, “Diane Chambers” appear in? Answer: Cheers. Something more challenging might be, which animal has the highest brain to body weight ratio? Answer: Human. A question that is more scientific might be interesting. Of what are the most common atoms in this universe composed? Answer: Hydrogen.

Whether you like music, movies, TV, sports or history, trivia can be a lot of fun. Everyone will be an expert at something if you cover this much territory. Sports enthusiasts will thrive when you ask questions about football or basketball, while a movie lover will glow with pride after answering Oscar trivia questions successfully. In either category, the gang will have fun laughing at the ludicrous answers and gaping in awe when someone actually knows the right answer.

William Jones is a freelance writer and often blogs for triviaquestions.net where you can find all kinds of trivia questions – he highly recommends checking out their sports trivia!

Earnest Parenting: help for parent who want to have fun at the park.